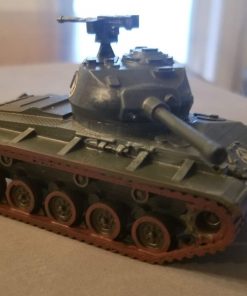 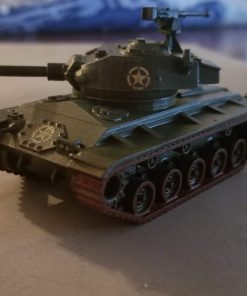 This a new .stl for the M24 Chaffee, optimized for 28mm and for FDM printing

Is there anything it can’t do?

Once the American military viewed the ground combat that commenced in 1939 in Europe, it quickly realized that its nascent tank design programs were far behind those of other combatants. The Stuart line of light tanks, just entering service, were a reliable and nimble design, but lacked the firepower and protection to stand up to the battlefield conditions in Europe. Requirements were made out for a new, better armed and protection light tank for the U.S. Army.

Multiple designs and modifications resulted in the M24 light tank, of which the first pilot, the T24, model rolled off the line in October 1943. Mass production began in March 1944, and by war’s end over 4,700 models had been produced.

The M24 saw service in the late war period, replacing the M5 Stuarts with not only American but even some British units. The first American equipped units saw action in the last German offensive, the “Battle of the Bulge”, in December 1944. By war’s end they were also in front line service in Italy.

After the war the M24 was widely distributed by the U.S. to allies the world over, and saw action in innumerable conflicts, including the Korean War, the War in Algeria, the French fight in Indochina, the subsequent Vietnam War, and the Indo-Pakistan wars. The M24 soldiered on for decades; up gunned and re-engined M24s and re-titled the NM-116, it served in the Norwegian Army until 1993.

I started working on an .stl for the M24 shortly after I got into 3D printing in early 2018. I was interested in the tank but was foolishly unaware as to just how complex the design is. I started with .kpi’s WIP file off Thingiverse. I designed the entire hull from scratch and used .kpi’s turret as a basis. I also used his tracks. After many, many test prints I ended up with something at least resembling the M24. I posted it to my Thingiverse page.

I was never really happy with the result and recently I set about to tune it. I started by dumping the turret altogether. I picked up the turret from Bergman’s 1/200th scale M24, upsized it and redid the main gun and MG barrels, and created a new HMG and pintle mount. I added the prominent center track teeth to the tracks and created recesses for assembly nubs to ensure proper alignment, post print.

Lastly, I refined the hull, adding track assembly nubs, and cleaned up parts to make for a better print and assembly.

I am much happier with this .stl. It does need to be printed with supports, and I am sorry to all you SLA print fans, but this is optimized for FDM printing.

The M24 in Bolt Action

This is why I call this the tank that can do everything. It is a light tank, so 8+ for protection. You can also buy “recce” for 10 points, so why wouldn’t you? The gun is the same, historically and game wise, as on a vanilla M4 Sherman – a medium ATG and 2” HE, which is pretty decent gun. Lastly it has up to three MGs (if you buy the pintle). On top of all that, it is the one tank I would consider buying as a “veteran” because you get to use the gyrostabilizer for the main gun, allowing you to move and shot without penalty.

With the forthcoming Korea book, the M24 is something you may want to see on your side of the table.