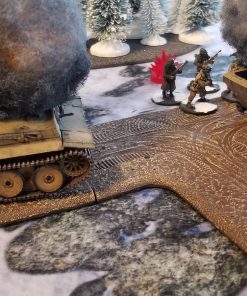 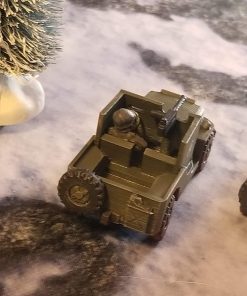 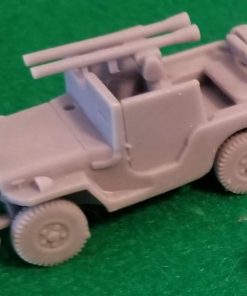 ** June 12,2020 – this file was revised and now includes files for both DLP/resin and FDM printing; the FDM fiels were tweaked with new wheels, jeep hull and revised weapons and the DLP files are all new **

The “Jeep” – a 1/4 ton 4X4 utility vehicle – only commenced production in 1941, yet by the war’s end over 640,000 had been manufactured. It was used for just about every purpose imaginable, and that includes as a (not very) armoured fighting vehicle. These files will give you a 28mm – 1/56th scale .stl of the armoured jeep used by American forces in North West Europe in late 1944 to the war’s end. They were field modifications, using armoured sheeting to protect the front and driver and passenger from small arms fire. The armoured jeeps were armed with either a .30 Browning MMG or twin “bazookas” on a pintle mount. The Bolt Action rules describes this vehicle as a 6+ soft skin, but it can not be damaged by small arms fire from the front. It can however still be pinned by that small arms fire. The twin ‘zook jeep is 105 points as a “regular” and takes the armoured car slot. The speed and ability to advance and fire 24″ on roads is a great bonus in your late war battles with the Reich.

I recommend printing at 0.1 mm layers, and for the ‘zooks and MMG, I suggest using a small brim on the print, to better hold the small parts.

The DLP models were test printed at .05mm with elegoo grey standard resin on an EPAX X1