Wheels of the Emperor

The conflict with the Empire of Japan is often thought of as starting on December 7, 1941, with the attacks on Pearl Harbour, the invasions of the Philippines and Malaya, followed by the rapid expansion of the Japanese sphere across the South Pacific.

The bloody fighting in the jungles of New Guinea and the “island hopping” campaign tends to narrow our view of Japanese forces to the resolute infantry backed by a few underwhelming tanks, often used more as bunkers than mobile fighting vehicles. These forces were either conducting the quick assaults in the first six months following Pearl Harbour or engaged in stoic defense of their homeland once the weight of the Western Allies bore down on them.

With that focus, we ignore the decades long campaign of the Japanese on the Chinese mainland. Starting in 1931 with the Japanese invasion of Manchuria and then exploding into a full-blown war in 1937, a war that lasted until the unconditional surrender of the Japanese in August 1945

The fighting in China was quite different from the South Pacific campaign; the terrain was expansive, there were roadways and railways that both aided the Japanese invaders logistically as well as requiring security from widespread guerilla attacks behind the lines.

As well, there was much difficult and bloody urban fighting within cities in the Chinese theatre.

The Japanese recognized the need for some wheeled armoured support for their troops in engaged in this campaign. The Japanese initially employed their Type 87 Armoured car, a copy of the British Crossley armoured car. This vehicle was limited by its solid rubber wheels and was restricted to solid road surfaces. The Japanese employed several other armoured car types, both four and six wheeled models, in the next few years.

The Japanese armoured cars of the early 1930s included

I chose to develop this model, the Type 92 Hokoku-Go, because it doesn’t appear to be available commercially, and it is a useful option in games like Bolt Action, as it has two weapons so it can fire at two targets each turn, ands it has recce. As well, it is available to not only Japanese army players but it is also available to the Chinese army player under both the Communist faction as well as the Warlord Army (a Bolt Action Chinese player can play as a Nationalist /KMT, a Communist or a Warlord)

This .stl represents a 1/56th scale model of the Type 92 Hokoku-Go. A helpful review of its history can be found here.

Note that the author of this article noted the vehicle actually had MMGs in both the turret and front hull, not the MMG and LMG armament proscribed by the Warlord book. 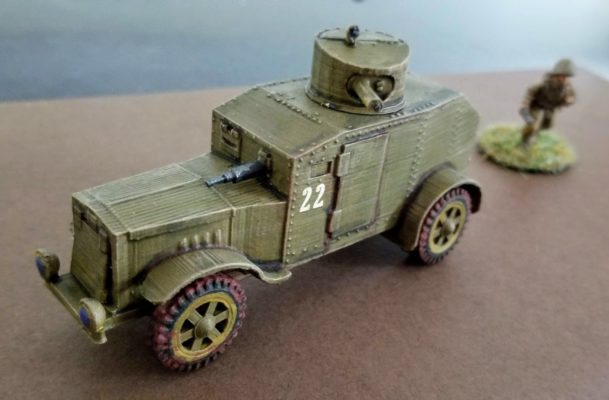 This is an original file. I created it for both the player of the armies of Japan as well as those playing as two of the three Chinese armies.

The FDM file consists the following

** please note the axles have arrows and “UP” printed on them; this indicates the direction the axles are to be mounted on the hull recesses**

Please print with supports and at 0.1mm layers. Clean off support material carefully and test fit all parts before gluing.

The .stl file for the Type 92 Hokoku-Go can be located here, in the Wargaming3d shop.