The Battle of Hampton Roads, also referred to as the Battle of the Monitor and Merrimack (or Virginia) or the Battle of Ironclads, was a famous and arguably most important naval battle of the American Civil War. It was fought over two days, March 8–9, 1862, in Hampton Roads, a roadstead in Virginia where the Elizabeth and Nansemond rivers meet the James River just before it enters Chesapeake Bayadjacent to the city of Norfolk. The battle was a part of the effort of the Confederacy to break the Union blockade, which had cut off Virginia’s largest cities and major industrial centers, Norfolk and Richmond, from international trade

And here is the Scenario from Qwibqwib (You’ll need a copy of Warlord Games Cruel Seas to Play): 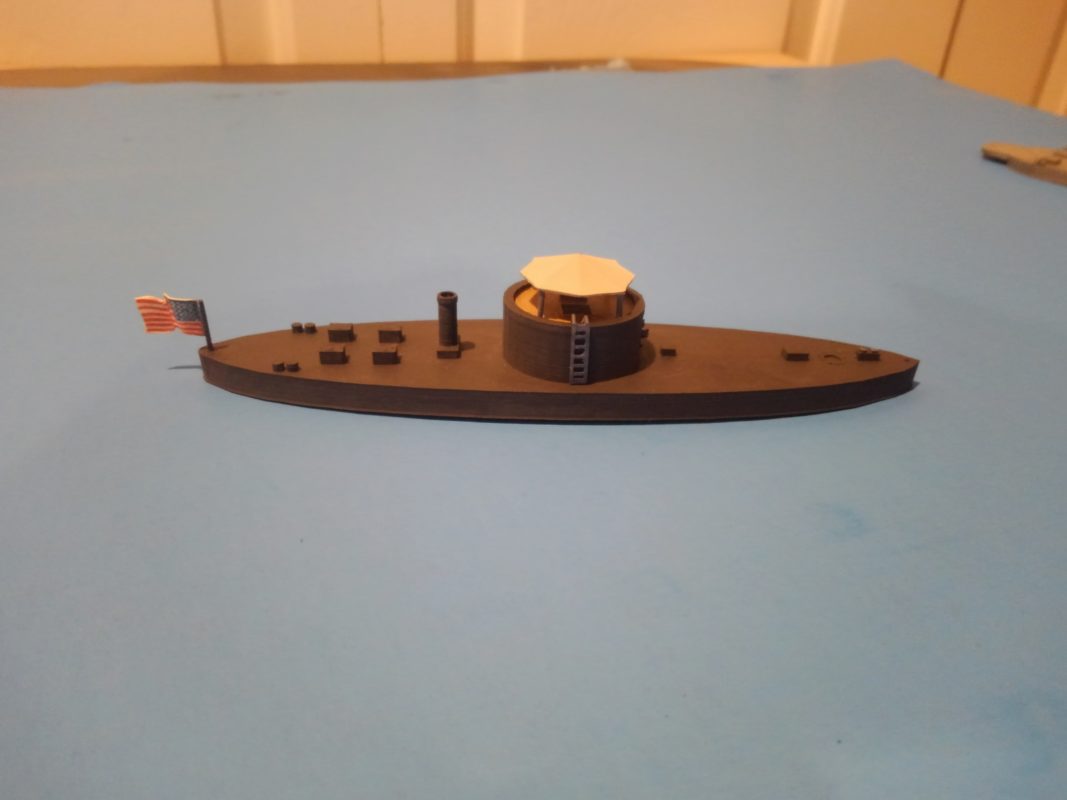 The previous day, CSS Virginia ran rampage through the US Navy Blockade at Hampton Roads. She sank 2 Union ships and damaged 2 others. The receding tide and oncoming darkness forced Virginia to retire to Sewell’s Point to make some hasty repairs.

After spending the night in safe waters, CSS Virginia is ready to again challenge the US Navy Blockade. Her orders are to sink the previously damaged USS Minnesota. Confederate intelligence has information that USS Minnesota has rifled guns and therefore, is a priority target. Each man is given two shots of whiskey, and a hearty farewell, as the Virginia sails out into the bay.

Overnight, USS Monitor has arrived to protect the grounded and damaged Minnesota and to counter the new confederate threat. Monitor has taken up a defensive position North-East of USS Minnesota. Her orders are to fend off the CSS Virginia and protect USS Minnesota until she can be recovered from the sandbar. Once Monitor spots Virginia looming ever bigger in the distance, she lays in a course to intercept the lumbering Confederate vessel.

The tide is getting low. Virginia has a deep draft and cannot approach close enough to get a good shot at the Minnesota. All shots by Virginia against Minnesota are considered long range. The smoke from the close range battle, the constant noise of cannons firing and enemy shot hitting the armor plate, causes both crews to be continually distracted. It is impossible to aim guns or concentrate fire. Guns in these conditions are aimed simply by pointing towards enemy muzzle flashes and pulling the trigger. Ironclad vs Ironclad attack range is reduced to 80cm. Shooting at shore batteries and the other boats in the area is handled as normal, unless otherwise noted.

Ironclads shot at each other all day and caused only minimal damage. On the contrary, when Virginia focused her firepower on a Union shore battery, it was destroyed in quick order. All of the wooden boats in the area kept their distance having witnessed the carnage of the previous day’s battle. With Ironclad vs Ironclad being the exception, all guns are treated as 3in guns in the range tables and the damage tables of the rule book.

Hits scored on an Ironclad do not cause damage to it’s hull. Only a result of 6 is counted, this hit is a critical hit. Roll another D6 and consult the critical rolls table below. 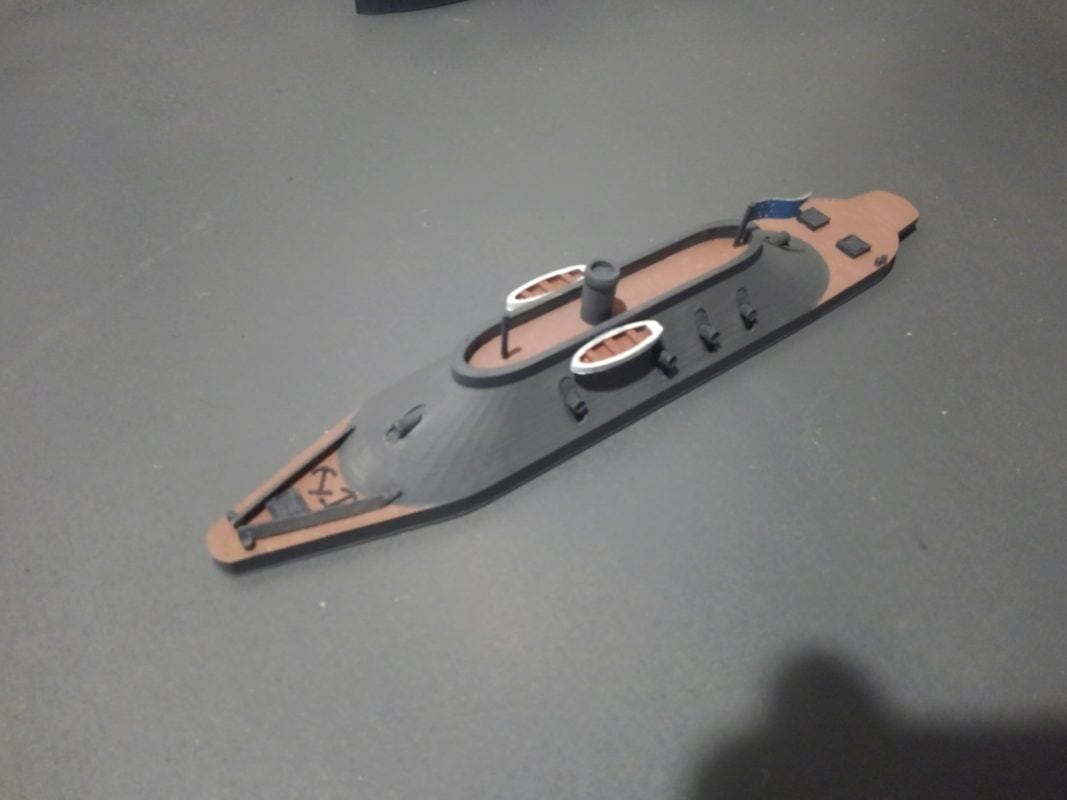 Both Ironclads may make a ramming attack and cause damage as normal. They do not take damage when making a ramming attack. They can receive damage as normal, if rammed. After contact, they must reduce speed to slow and must continue in the same course for one more turn. Additionally, CSS Virginia must make a check as a regular crew and if failed, she loses her ram, and thus ability to ram without taking damage, for the rest of the game.

USS Minnesota has one 3in gun she can fire south across her bow. This forward facing 3in gun has a 180° arc and normal range and firepower. Minnesota has 120 Hull. USS Minnesota was in an awkward position throughout the engagement, and only damaged the CSS Virginia when the Confederate Ironclad came very close attempting to ram.USS Minnesota may make attacks with her broadsides. A Broadside has a 90° arc centered on the middle of the long side of the ship, and is treated as 10 3in guns with normal range and firepower. Make sure the Stern of Minnesota is facing directly north during setup. She is grounded and may not move for the entire game.

*CSS Virginia may not enter into shallow water. If Virginia touches shallow water, she is grounded. CSS Teaser may free her in one turn by coming into contact with her.
*USS Monitor has a turret with two separate guns. A critical that destroys a gun on monitor, instead damages the turret and wedges it into the firing arc of the last shot taken by Monitor. 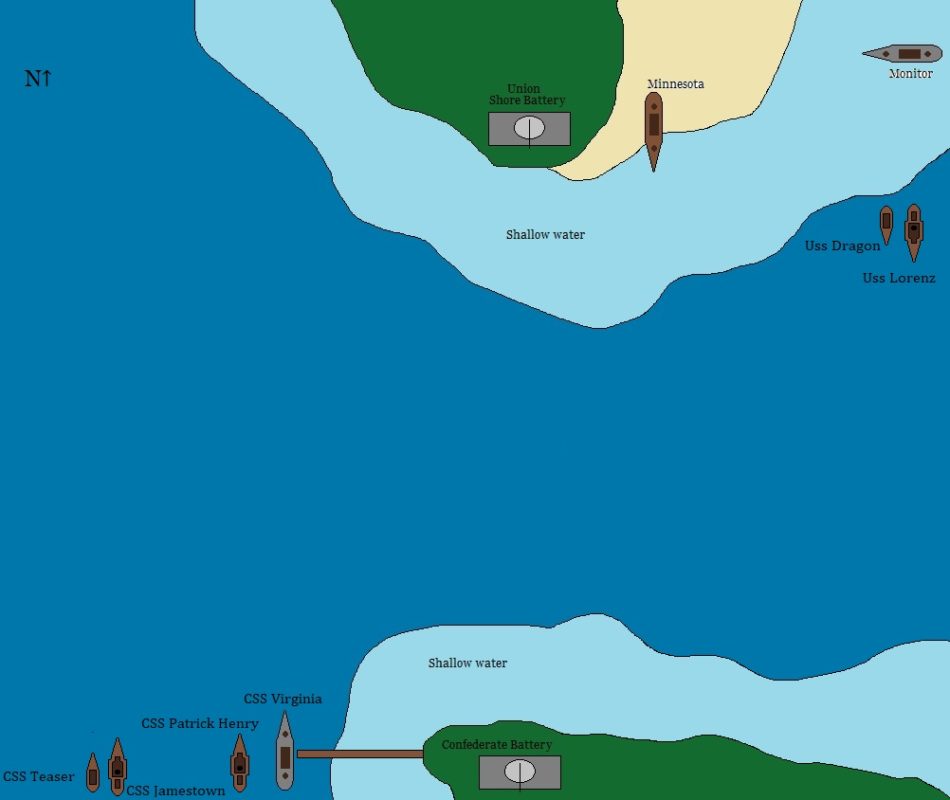 Get the ships you need to play this scenario using Warlord Games Cruel Seas rules here: