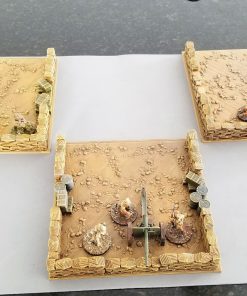 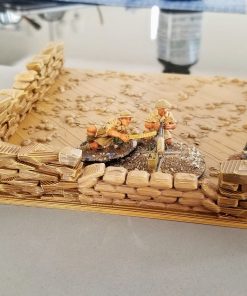 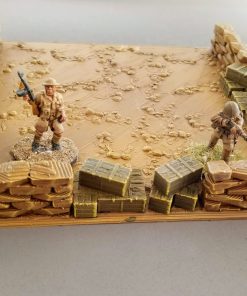 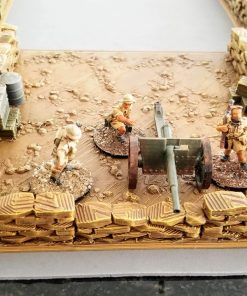 The Italian Army is arguably the Bolt Action army with the least favourable national rules. It would hard to argue that their special rules give the player tabling an Italian Army an edge over any other nationality. That said, there are some special rules that can help balance the odds for the Italian player. One potential aid is the defensive strategy rules (allowing re-roll of the attack/defend roll at the start of applicable games) and the following :

While it is easy enough to cobble together suitable terrain pieces to create these, I thought an Italian player may benefit from having three printed defensive positions (the maximum allowed on the D3 die roll) ready to go on the table.

I did three different 6″ x 6″ hard cover positions, all based on the concept of a hastily fortified rock cairn/walls; I purposely designed them so they would have enough eye interest without requiring additional flock and the like, so once painted they can be roughly handled in and out of your game box without worry of leaving a trail of grit and the like in your kit.

These .stls are intended for FDM printing. I printed the ones in the photos at .24mm layers with no supports but with ironing on. I highly recommend you consider using the ironing feature to keep the rough top surfaces fairly smooth on such a crude layer height setting.