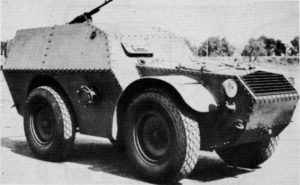 The FIAT SPA S37 Auroprotetto (“self-protected”) was developed in 1941 on the chassis of the FIAT TL37 light artillery tractor. After some trials by FIAT, the Regio Esercito (Italian Royal Army) ordered 150 vehicles in 1942. This lightly armored vehicle was used primarily for police and law enforcement missions, especially against partisans in the occupied Balkans. The construction called for sloped plates bolted to a frame fixed over the original 4-wheel drive and steering chassis. This armor only protected from shrapnel and small arms fire. The troop compartment was large enough for eight men seated on side benches, and access was performed through a rear two-piece door. The armament consisted of a Breda 8 mm machine gun. The very large road wheels and narrow wheelbase provided a low ground pressure and excellent mobility, in addition to the four-wheel drive and all-wheel steering.

The only known versions were the flamethrower (S37 Lanciafiamme) and the antitank version, armed with a 47/32 Mod. 1935 gun.

The S37 in action

The S37 was deployed in the Balkans, After the surrender of September 8, 1943, some of these vehicles were captured by the Germans, and some fell into the hands of Yugoslav partisans.

The S37 in Bolt Action

The S 37 is offered to the Italian players in bolt Action, under “transport”. It is a 7+ armour open topped wheeled transport, capable of carrying up to 8 men or towing might of medium ATGs or light howitzers or AA guns.

It will cost you 61 points for a regular S 37, with a front OR rear mounted MMG for an additional 15 points.

Although not listed on the Warlord costing, some S 37 models were armed with a forward facing 47/32 ATG. If your opponent is amenable to using the Vehicle Design system, the light ATG would cost 50 points, so a regular crew on an S37 armed with the 47mm light ATG would cost 111 points. Not cheap, but still a highly mobile, armoured tank destroyer.

Historically the S37 were used by other nations in the war. Some were captured and used by the Yugoslav partisans. As well, after the Italy quitting the Axis pact in September 1943 they were seized and used by German units. Although not explicitly listed under either partisan or German lists, their use in Bolt Action would be historically correct.

This is an original file, representing the standard S37. I have created it to allow the mounting of the MMG to the front or to the rear, as per the game’s Army Italian listing. The MMG mounting fits into a recess at either location, so it can be inserted and removed as required. I also created the 47/32 “elefantino” anti-tank gun and mount, to fit the same forward recess.

The file is meant to be printed on an FDM printer. I printed it on a “fine” setting, 0.1mm layers, with supports. There are alignment marking on the axles and the hull to ease the centering of the axles on the hull. There are five wheels, the fifth is the spare that mounts on the right-hand side.

As always, remove support material with care, test fit before gluing. The guns do not need to be glued into the hull unless you wish to do so. They will snug fit into the recesses in the hull passenger compartment.

The file is available at the www.wargaming3d.com marketplace.