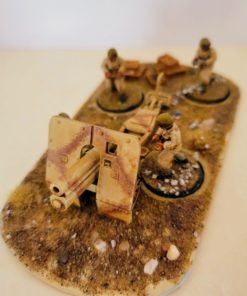 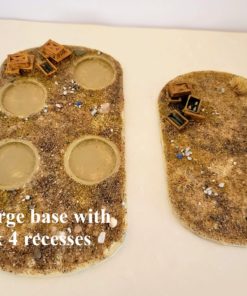 It is commonly understood that Italy entered WW2 completely unprepared for a highly mobile, high resource consumption nature of the conflict. If there was any silver in the dark cloud hanging over the Italians is that the Royal Italian Army had actually equipped and trained to fight in one area, that being mountainous terrain. This was historically a prudent choice, as Italy’s land boundaries are mountainous, so any military action would be over and through said terrain. This planning explains Italy’s emphasis on small tankettes over larger AFVs, as they were better able to negotiate up narrow mountain passes whereas larger vehicles were unable to do so.

Unfortunately, they ended fighting in just about everywhere but in mountains (June 1940 in France being the exception) but that is another story.

In the Italian armoury was the excellent Skoda 100mm Mountain howitzer (a medium howitzer in Bolt Action) acquired as reparations, post Great War. These guns broke down into pack loads and could be transported in carts pulled by horses of mules over terrain that would otherwise be impassable.

The gun was normally fitted with spoked wheels, but some later models had small pneumatic tired wheels. I offer both in this .stl pack; I used the spoked wheels on the model in the photo.

The gun was also used by the Germans, both from ones acquired form the Czechs, post Munich, and the Italians, post-Italian capitulation. In German service it was known as the 10 cm GebH 316(i).

This pack includes two option gun bases. I did these up and printed them in FDM (I have a very small build plate on my resin printer). The fist base is smaller, has ammo crates on one end. The second base is larger, and I added “donuts” for the four 25mm based gun crew. This allows the recesses for the crew figures to stay clean when you add the base plate finishing. The recesses are oversized to 28mm so there is wiggle room. It too has ammo crates at one end. I also added three different crates alone that can be printed in resin and added to your own base plate, should you choose.

This gun’s .stl pack is designed only for resin printing; the nature of the design prevented me from making a usable model in FDM. It was just too fine in parts to allow FDM as a print medium.

The file pack includes the basic and pre-supported .stls. The support settings may not be to your liking.

Remove the supports with care.