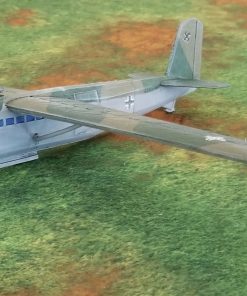 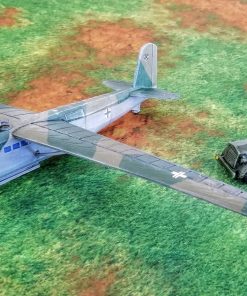 This is an original file, it represents a 28mm model of the German DFS 230 glider. It is optimized for FDM printers.

It is ever so slightly under scale – it is 95% of actual scale. If you wish to have full scale (1/56) please print at 105%. I did this just to balance realism and storage considerations. It is a large model, but easily printed on almost any DFM printer; due to the .stl design, the longest piece is <170mm. The completed model measures 190mm long X 315 mm wingspan.

The DFS 230 was a German transport glider operated by the Luftwaffe in World War II. It was developed in 1933 by the “Deutsche Forschungsanstalt für Segelflug” (DFS – “German Research Institute for Sailplane Flight”) with Hans Jacobs as the head designer.
In addition to the pilot, the DFS-230 glider had room for nine men who sat close together on a narrow bench located in the middle of the fuselage (half facing port, half facing starboard). Entry and exit to the cramped interior was by a single side door. The front passenger could operate its only armament, a machine gun. It was an assault glider, designed to land directly on top of its target, so it was equipped with a parachute brake. This allowed the glider to approach its target in a dive at an angle of eighty degrees and land within 20 metres (60 ft) of its target. It could carry up to 1,200 kg (2,600 lb) of cargo.
It played significant roles in the operations at Fort Eben-Emael, the Battle of Crete, and in the rescue of Benito Mussolini. It was also used in North Africa. It was used in supplying encircled forces on the Eastern Front such as supplying the Demyansk Pocket, the Kholm Pocket, Stalingrad, and the defenders of Festung Budapest. It was used right up to the end of the war, for instance, supplying Berlin and Breslau until May 1945.

This file has two fuselages; one with a small cupola and an MG mount, and the second without the cupola and MG mount. The remaining peice are the same; two wings, a tail piece with fits into two protrusions at the end of the fuselage, and the landing skid, the wing struts and the MG.

The glider is the photos is my final test print. The file took several as it was “from scratch”. I was only printing at 0.16mm layers, but I always recommend printing at 0.1mm layers, with supports. You may want to use a brim for the struts and MG file, dependent on how your printer handles small parts on the build plate.