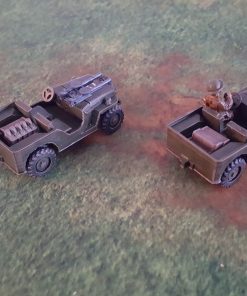 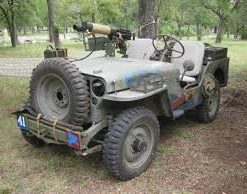 ** June 12,2020 – this file was revised and now includes files for both DLP/resin and FDM printing; the FDM files were tweaked with new wheels, jeep hull and revised weapons and the DLP files are all new **

This is a model of the WW 2 Willy’s jeep, which was modified by the British in WW2 to enable it to be delivered to the battlefield via gliders. The jeep was stripped of all non-essential weight – e.g. the bumpers and wind screen were removed, and the jeep was also festooned with weaponry. It was used in the June 1944 Normandy landings as well as the Arnhem landings in September 1944.

I designed this model for use in 28mm table top gaming, such as the Bolt Action gaming system.

I also added crates and jerry can that can be added to the jeep to represent cargo the airborne troops carried on these vehicles. Included is a set that does on the hood of the jeep.

Be the first to review “British Airborne Jeep” Cancel reply