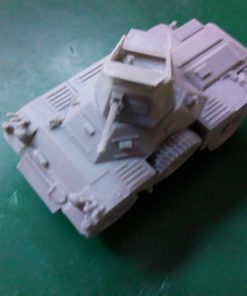 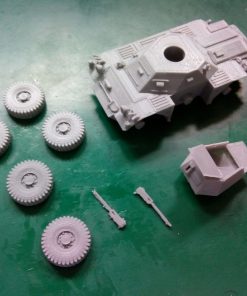 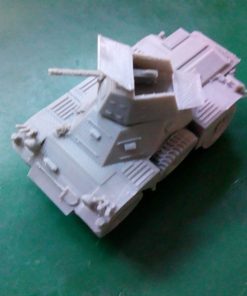 The Ferret scout car was designed to replace the WW2 Daimler Dingo in reconnaissance and liaison roles within the British and other armies. It proved to be a very successful vehicle, and built on the formula of the earlier vehicle in general design. Lessons were learnt and the Ferret was generally larger, permitting the addition of a small turret mounting a 30 cal Browning machine gun for self- defence. The concept of obtaining information by stealth remained, and this vehicle was easy to conceal and very agile. The six-cylinder engine was a Rolls-Royce B60 overhead-valve petrol unit developing 129bhp, good enough to endow the 3.75-ton (‘dry’) Ferret with a top speed close to 60mph. Drive was transmitted via a fluid flywheel to a five-speed pre-selective gearbox and thence via a transfer ‘box to all four wheels. Further information can be found at http://www.tanks-encyclopedia.com/coldwar/UK/Daimler_Ferret and https://www.wikiwand.com/en/Ferret_armoured_car.

This model provides a hull and two alternative turrets, one closed down and the second with the hatches open to permit the addition of a scale crew member model. The wheels are quite detailed and require some care in printing, but add to the overall impression of the model. A Browning machine gun model is provided as a separate item to be mounted as required. Some adjustment may be required to ensure a tight fit in the turret mantlet at a user selected angle.

The model should be a good fit for wargames in the Cold War or modern era, in both reconnaissance and general use roles.

Be the first to review “Ferret Mk2” Cancel reply