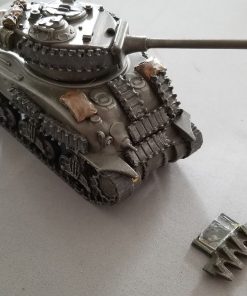 This is an original file, and quite a small item, but will allow 28mm gamers to affix a Culin Cutter to the front of most M4 Sherman models, without having to glue it there permanently. This allows you to add or remove it as the situation and scenario may dictate. Adding the Culin cutter costs 10 points in Bolt Action, but allows the tank so equiped to advance through hedgerows without impediment. Points well spent on any applicable scenario.

It is a simple file, offered for free. It can be printed on “draft” settings, but do please use supports, to ensure the cutter’s teeth print properly. I fastened it to the underside of the model with a small piece of double sided tape. It comes off post game without damaging the paint.

This print fit my company B model M4, my own 28mm FDM print of an M4 and a Warlord plastic M4. It did not fit my Rubicon M4 plastic kit because the Rubicon kit has fine tow hooks on the lower front that got in the way. Rubicons are like that – great detail but too much stuff that can break on the table. Like wearing a Rolex when you go to play rugby.

Common in military history are stories of brilliant solutions coming from unexpected sources. The Culin cutter is just such a device. When the Allies landed in Normandy in June 1944 their advance was slowed to a crawl by the thick, high hedgerows that lined the narrow roadways. These hedgerows couldn’t be pierced easily and the roadways became clogged lane ways of death for allied tankers.

The solution came from an unassuming New Jersey native, Sgt. Curtis Grubb Culin III, who was serving with 2nd Armored Division. He thought up using scrap metal from wrecks and fashioning them into sharpened teeth, which were fitted to the lower fronts of M4 Shermans and M5 Stuarts. These tracks could now break into and through the tangle of centuries worth of dirt, roots and bramble that formed the thick hedgerows. This allowed the allies to regain a measure of their mobility and to finally break out from the beachhead. Culin later lost a leg in the war, but did survive to return home to the U.S.

Sgt. Culin was awarded the Legion of Merit.

Be the first to review “Culin Cutter” Cancel reply