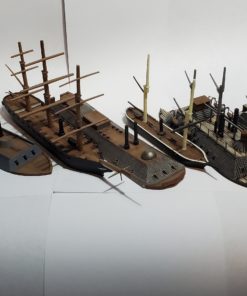 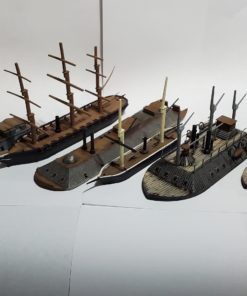 That Devil, the Arkansas Set

Pairs perfectly with Dawn of Iron!

Report an abuse for product That Devil, the Arkansas Set

CSS Arkansas was one of the more famous ironclads built by the Confederacy. She did not have a long life, but it certainly was eventful. Before she had even fired a shot, her name and presence struck fear into the Yankee sailors on the Mississippi River. Their fears were even more rational once she steamed out of the Yazoo river ready to fight and ran straight through Farragut’s formidable fleet to Vicksburg! This battle pack allows her exploits to be played out on the table. Will she be sunk early in her career by Queen of the West? Will Farragut’s fleet manage to sink her before she makes it to the safety of the Vicksburg batteries? Or will Lancaster be able to go those last hundred yards with her attack and send Arkansas to the bottom? Only the roll of the dice can tell!

Be the first to review “That Devil, the Arkansas Set” Cancel reply