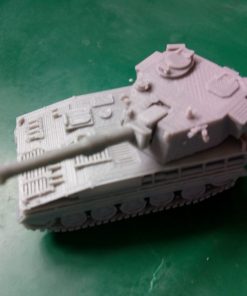 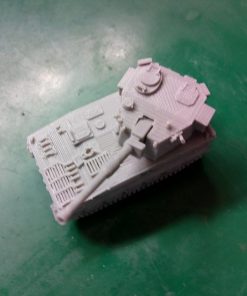 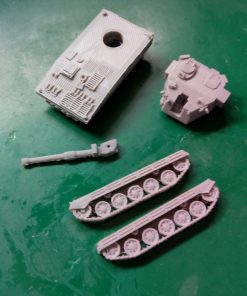 The Abbot FV433 self-propelled gun is a member of the FV430 series of AFVs, and was developed by the UK’s Fighting Vehicles Research & Development Establishment (FVRDE) in the late 1950s. It was designed to replace the 25-pdr gun in towed and self-propelled format (Sexton, proposed Saracen and Centurion variants). Vickers were appointed design parents for the new SPG, and a range of prototypes were built and tested in the early 1960’s. The vehicle was produced between 1964-67, and served broadly with the Royal Artillery in Germany and the UK, proving a popular and effective vehicle until developments in armour and tactics required a move to 155mm artillery for the tactical support role. Further details can be found at https://military.wikia.org/wiki/FV433_Abbot_SPG and https://www.flickr.com/photos/tags/fv433/.

This model is delivered in five parts. The two wheel/track assemblies are fitted to the main hull, and the gun to the turret, with this assembly being free to rotate as in the original. The tracks can be printed with the axles arranged vertically, and with supports only from the print base. Only supports from the printing base are required for the main hull (simplifies cleaning out the sides) and for the tracks. The turret can be supported everywhere.