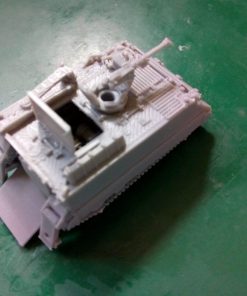 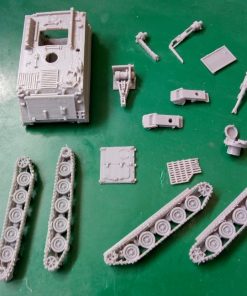 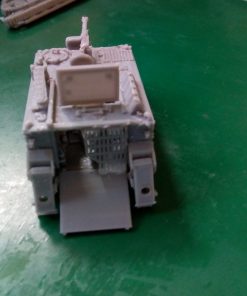 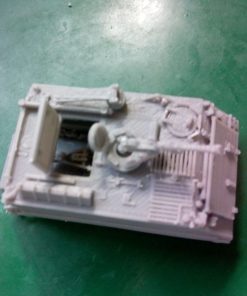 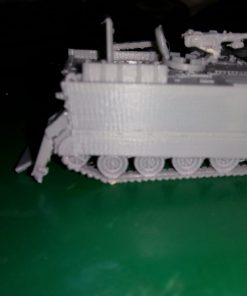 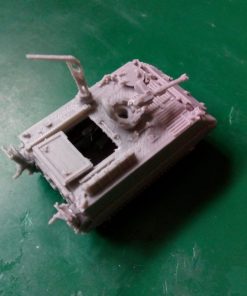 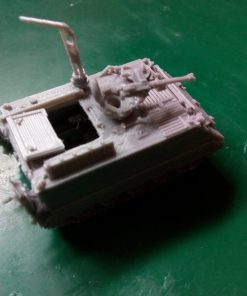 The XM806E1 recovery vehicle was a modification of the M113A1 APC. A 20,000 lb capacity winch was located inside the personnel compartment, with other recovery equipment, and two spades mounted on the rear to provide anchorage during winching. A 3000 lb capacity crane was mounted on top of the vehicle on the driver’s side to handle and position heavy components. Information is somewhat limited, but further details can be found at http://russian-tanks.com/recovery-vehicle.php and the test report is also available on the internet at https://apps.dtic.mil/dtic/tr/fulltext/u2/859649.pdf, offering excellent photographs of the vehicle in an appendix.

Two models are provided in this product. Either can be fitted with the commander’s cupola in the open or closed position, and a separate driver’s hatch is also provided to increase the options. A 0.5″ MG (based on a design by M Bergman) is provided, as this was normally fitted on this vehicle.

A stowed XM806E1 can be assembled by using the standard M113 tracks and the basic hull, adding the top hatch in closed position (normal). Either the stowed or deployed version of the crane should be used, and the rear ramp should normally be glued in the closed position. The spades should be mounted in the raised position.

Alternative tracks are provided to simulate the position of the vehicle when it has been reversed with the spades lowered in preparation for winching. The spades should be glued in the lowered position (against the stops), and the rear ramp positioned to touch the ground, as it needs to be open for winching. The crane would normally be stowed for winching. A separate grid is provided to simulate the protective grille mounted in the open rear door to protect the user against winch cable failure. Rear hatch variants are provided to ease fixing in open or closed positions.