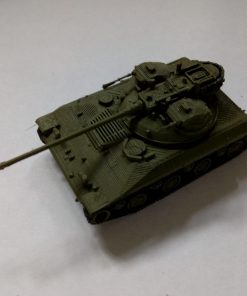 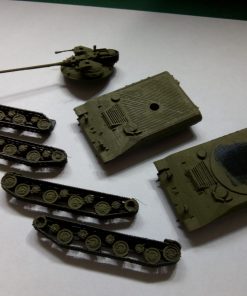 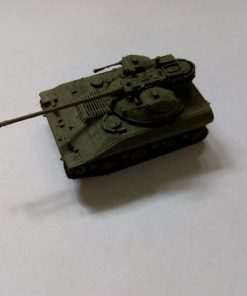 The T-92 light tank was a US light tank developed to replace the M41 Walker Bulldog and provide an airborne / airdroppable capability. Designs were requested from three firms, but the radical approach taken by AAI, with a novel concept that was later emulated by the AMX-13, CVR(T) and Merkava series, among others, was taken forward. Trials progressed well, with changes to the suspension system leading to a version with a raised idler wheel and automatic track tensioning, and detail improvements. Emergence of the Soviet PT-76 led to the addition of swimming capability to the requirements, and the design could not readily be adapted to meet this new demand, so it was abandoned, despite its attractive features. It was also felt that the 76mm gun was now outdated, but later developments of low recoil 90mm and 105mm guns (e.g. from Mecar or Cockerill among others) could have been adapted to the semi-automatic operation used on this advanced concept tank. Further information can be found at http://www.tanks-encyclopedia.com/coldwar/US/76mm-gun-tank-t92 and http://warfaretech.blogspot.com/2014/07/t-92-light-tank.html.

This product offers the tank as delivered for trials, with options for early rubber band tracks or the later metal link (raised idler) version. Turrets with both track links mounted at the rear are also provided. Versions of the hull as an integral component, or split in two to permit easier printing ‘vertically’ on FDM printers, are provided.

The option exists to create fictional tanks with larger calibre guns, should this be of interest to wargamers investigating ‘what if’ scenarios. This vehicle is more attractive than the M551 Sheridan in many ways.