Uncle Joe’s Little Tank That Could…

Nicholas Astrov’s design team at Moscow Factory No. 37 was assigned the task of designing amphibious and non-amphibious scout tanks in 1938. They produced the T-30A and T-30B prototypes. The former was to be manufactured as the T-40 amphibious tank starting in 1940. It also led to the T-40S (sukhoputniy, “dry-land” version), a heavier tank prototype which was considered too complex to manufacture. The T-30B prototype, sharing the T-40’s chassis but simpler in construction and with heavier armour, was accepted as the T-60 scout tank, and production began in July 1941, just after the German invasion.

Although at first intended to carry a 12.7 mm machine gun like the T-40, the armament was later upgraded to the 20 mm TNSh cannon, a tank version of the ShVAK, on the advisement of the People’s Commissar for Tank Industry Vyacheslav Malyshev. This weapon could penetrate 15 mm of perpendicular armour at 500 m.

Several T-60s were captured and pressed into German use as the Panzerkampfwagen T-60 743(r).

The Soviet Union produced a prodigious number of multi-launcher rocket systems in WW2. One was the BM 8 -24; that is a projector for the 82mm BM 8 rocket; in this case capable of launching salvos of 24 rockets. These launchers were mounted onto the chassis of both T-40 and T-60 tanks.

Records vary as to the number so converted; I have read statistics raging from 44 to over 160 of these conversions being complete.

I have added two postings to Thingiverse for this file; for the T-60 itself and for the T-60 BM8-24 multi-launcher. Both are a derivatives and extensive rework

of kpi’s file for the T-60. I started with that file, reworked the tracks, thickening the tread and adding tread blocks the entire length of the track, creating new bogie and drive wheels, and reworking the suspension. I created spacing lugs on the hull to ensure proper height to the track placement. 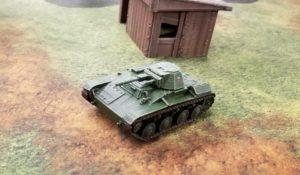 On the hull I added new exhaust grills, tool boxes, plates and bolts, and reinforced the fenders. I created new barrels for both weapons in the turret.

On the BM8-24 model, I created the entire system from scratch. The assembly should be self-explanatory when you print it out. There will be a cursed amount of support material to clean out of the support structure, but that can’t be helped, unless you feel lucky and print it without supports. I didn’t try that. There were many failed test prints before I got to this end product. 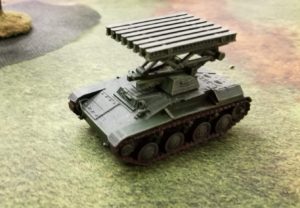 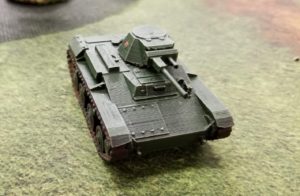 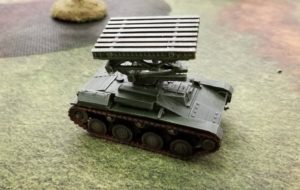 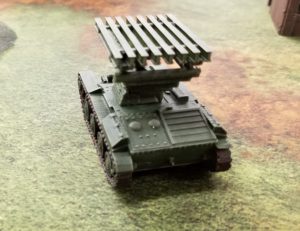 You can find the files here:

The T-60 is rated as a “light tank” (+8) in Bolt Action. It is armed with a light auto cannon and a coaxial MG. This is one of the very few options a Soviet player has to equip themselves with a light auto-cannon.

The T-60 BM 8-24 is not listed in the various books from Warlords, but its value can be easily determined using the “Vehicle Design System”. The following values are for a regular model:

So you can get a tracked, armour +8 closed-top multi-launcher able to move and shoot for 140 points. Not a bad deal for a bit of random mayhem. Sure it only hits on a six, but just like Harry Callahan asked …