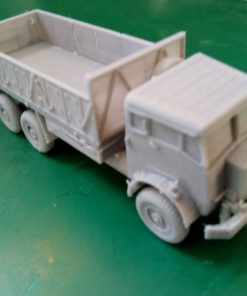 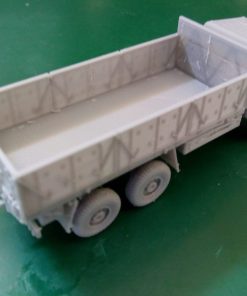 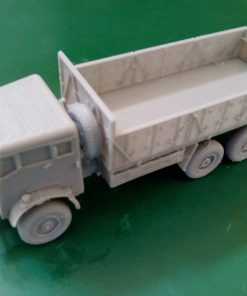 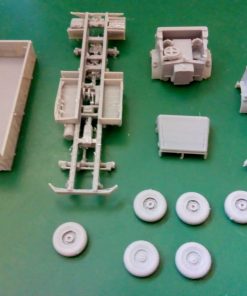 The AEC Militant Mk1 truck served for many years in the British Army in the UK, Germany and elsewhere. They were developed from commercial models in the early 1950’s, initially as a gun tractor to replace the Matador, but many variants were developed. This is the GS version, without canvas tilt, but with winch. The Militant was one of the workhorses in meeting heavy transport requirements, and was widely used by the RCT, RE and REME. It was still in use in the late 1980s and beyond, and was ultimately replaced by the Bedford TM 8-tonne and 16-tonne trucks. Further information can be found at https://en.wikipedia.org/wiki/AEC_Militant and https://www.trucksplanet.com/photo/aec/militant_mk1/militant_mk1_k1.pdf.

This model should be a useful addition to British and Commonwealth model armies of the post-war years.

Printing should be straightforward. The chassis should be printed with the axles uppermost, and removal of supports should be relatively easy. The solid cab and lower half of the split cab can be printed in normal orientation, with the top half printed with its rear face on the print bed to strengthen the window frames. The spare wheel carrier prints well in normal orientation. Superglue can be used to position the various elements. The cargo body can be aligned to the rear triangular extensions and the start of the underbody storage compartments, and is best glued on first. Wheels can then be added (some minor work might be required to clear the positioning holes on the inside of the wheels). The spare wheel carrier with wheel can then be positioned and glued, and the selected cab added last.

I have added a separate file with an improved solid cab in a separate zip file, as I have had reports of problems downloading the original. I hope this helps.

The product file has been replaced by an updated version that has improved meshes, as a problem was reported printing the cab at Shapeways. This should now be resolved. I have retained the same file name, as this should allow users of these files to update their designs directly.

A version of the cab suitable for printing at 1:200 scale has been added to the latest combined zip (-str-), as this was requested.