I never took any interest in Naval Wargaming until Warlord Games released Cruel Seas (an excellent, if poorly proofread beer and pretzels type game focusing on the smaller ships battling it out on the coast during World War Two in 1/300 scale, you can read our 3D printing guide here). Following on from this success, they announced the upcoming game Black Seas, which looks to be very similar in game play, but focusing on 1/700 ships in the age of sail.

Late last year, Firelock Games (makers of Blood and Plunder) launched a kickstarter for a 1/600 age of sail game called Oak and Iron (you can download the rules for free from their website here), focusing on the age of sail and the golden age of piracy, while Sea Dog Game Studios has had their “Sailpower the Game” rules system out for some time now (now in its second edition) that works with a wide variety of scales and finally Saturnalia Studios ran a kickstarter for a completely 3D printable age of sail game called Fire and Sails, and that just scratches the surface of a few of the wide variety of games in this period. With this in mind, there is now plenty of games focusing on this period that are easy to pick up, and ideally suited to 3D Printing.

What is Black Seas?

Black Seas is a forthcoming miniature wargame from the team at Warlord Games focusing on Age of Sail combat. According to Warlord Games it is ideally suited for miniature ships between 1:600 and 1:800 scale, of which they have settled on 1:700 scale for their miniatures. It shares some similarities to their previously released game Cruel Seas, with modifications to take into account things such as the influence of wind on the sailing ships and the technology available at the time. You can find out more about cruel seas in the official trailer for the game below:

You can watch an interview with the creator Gabrio Tolentino (who is also an active poster on the facebook groups Warlord Games: Black Seas and Black Power and Black Seas Community) here:

Wargames Illustrated have also given a flip through preview of the forthcoming rule book (Due out in October 2019), according to the video below, the rules will be available as a standalone rulebook, or a starter box set called Black Seas: Master and Commander as well as a leather bound, limited edition rulebook and boxed set:

The game will allow you to control naval forces from Great Britain, France, Spain and the United States of America during the periods of 1770-1830 and there are also rumors of potential fantasy rules, though I’m not sure if they will be official or unofficial, but they may allow you to pull out your old Man-o-War or Dreadfleet fantasy ships from storage as well! For now, you can read the designer notes by designer Gabrio Tolentino here.

Of course, Black Seas isn’t the only game of this scale available, and there have been many produced over the last few decades, here are some of the more recent ones, or ones that I think are at least somewhat 3D printing friendly.

Oak and Iron by Firelock Games

This game is just coming out of Kickstarter and about to go on general release shortly. Produced by the same team that brought you the 28mm game Blood and Plunder, Oak and Iron is a 1/600 naval game which according to it’s creators:

Oak & Iron is a 1/600th scale naval game set in the age of piracy, imperial expansion, and above all – fighting sail. It allows players to recreate battles between squadrons and small fleets of armed sailing ships. The game is designed to be true to the theme and tactics of the period while supplying significant flavor for the various factions. Players of Oak & Iron can expect to find all the usual design hallmarks fans of Firelock Games have come to know and love: innovative rules, historical integrity, and beautiful models.

The beauty of this game is that it’s basic rules are already available on it’s creators website, for free, meaning that you should be able to at least give them a go and see if you like them using some of the 3D printed ships I’ll list below before committing to the game system. I think I’ll most likely use the same scale across the board, and try and base my models up so that they are compatible with as many systems as possible (if that is in fact possible). This game does however seem to have some form of cards and tokens that are used, so that might limit the ability to use 3D printed ships without first purchasing at least some type of base set or expansion.

It does focus on a time period that is slightly earlier than Black Seas focuses on, as well as the golden age of piracy, which I think could make for a fun area to focus on (I love the idea of potentially running a pirate fleet!).

I’ve been following Sea Dog Game Studios for quite some time on instagram, as Brian the owner is also a digital sculptor and has made some great 3D printed models that are compatible with Cruel Seas (he only sells the physical models though, not the STLs), as well as a custom shop for 3D design. I was lucky enough to meet him at Historicon this year and we spent a great deal of time chatting about 3D printing and miniature wargaming, where I ended up picking up a copy of his rules for Sailpower: The Game. I still haven’t got around to actually playing it yet as I’ve got a bunch of other projects on the go. According to the creators:

Sailpower is a miniatures game that allows the players to take on the role of a captain in the Age of Sail. Command small ships, large ships or even a whole squadron. It’s your call! Battle other ships, or embark on a mission seeking plunder and riches while giving your enemies the slip. Sailpower is a complete system designed to support fast paced sea action, exploration and adventure. You can play Sailpower on a small table with a couple of ships, a big table with many ships, or even a floor battle with your “sea” covering the whole room! 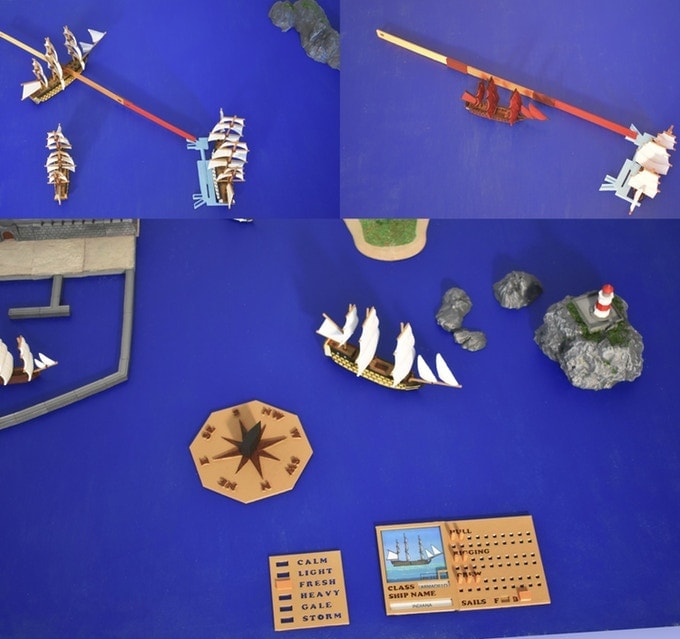 Available on Kickstarter, this looks like a great set of files to get (along with a playable game that you can print yourself!), except that the kickstarter is already over. We hope they will be available soon.

Fire and Sails are an 18th century Wargame of naval battles, with 1:650 scale miniatures designed for 3D printing (FDM Printers Optimized). Starting from a historical documentation process, we have worked on an interactive design process to achieve the maximum level of detail that a 3d FDM printer can offer, getting quality miniatures that are easy to print.

The ships linked to in this article are modelled in a wide variety of scales, meaning theres a good chance that the ship you are going to print is going to need to be rescaled in order to make it useful for the game you intend it for. The good news is that 3D printing and modelling makes it easy to rescale a model to a size that you want, though there are some downsides to this, the smaller you get the more exaggerated certain features need to be in order to function on a wargaming table, be visible to the naked eye and not break. And the larger you scale, the more likely things will look out of proportion, so if you can find something in the correct scale, use that over something that needs rescaling if you can.

I’ve written an entire article around how to rescale your models for 3D printing that you can find here. The general rule of thumb however is that you take the scale of the model that you currently have, and divide it by the scale of the model that you want to have. So, let’s say you had a 1/600 model that was designed for use in Oak an Iron, but you wanted to use it alongside your 1/700 models for black seas. The maths would work out to be the following:

To make it easy, here is the maths for the files that will be linked to in this article:

Where can I find 3D models suitable for use in Age of Sail games?

Right now there is a small but active group of people creating Age of Sale miniatures in scales ranging from 1/600-1/1000. I expect that as these games increase in popularity, you’ll start to see a wider range available.

Simon.Mann aka T1ckL35 has accounts on both Wargaming3D.com and Thingiverse and is currently creating a series of 1/700 age of sail ships from the 1740s through to the 1810s. These are currently some of the best 3D printed models available and are a mixture of free and premium files and most include options for both 3D printed or copper tubing masts, as well as 3D printed sails.

These are all available as a single file to download, which includes the following (as well as Paper Sails that can be printed out and rescaled for other ships if you prefer):

Fire and Sails by Saturnalia Studios

This is a kickstarter that ran for a very limited time (July 30, 2019 – August 20, 2019) and is now closed. As far as I can tell there is no website that sells these yet (I’m reaching out to them currently to see if they will have an online store, or if they’d be interested in hosting them on Wargaming3D, I’ll update once I know more), if you were lucky enough to snap up the kickstarter for 50 Euro, you would have got the following (as well as rules and terrain STLS):

While some ratlines I’ve seen have been essentially printed (on clear plastic such as Warlord Games ones) or laser cut, DAC designs has another, somewhat more accurate looking idea. Using a 3D printer to crate a jig for making them out of cotton before gluing them onto models. You can find their ratline maker here:

These are in a larger scale (mostly 1/300) and designed for both laser cutting and 3D printing depending on the item. They will need to be rescaled for most of the games mentioned, but are some good sources, especially the ratlines, which I think are nicer than what warlord makes, and less effort than cotton ones if you have access to a laser cutter.

These ships are an unknown scale (but are most likely close to 1/600) and were made for playtesting the Oak and Iron rules.

And that’s it, we’ll be updating this post as we find more things, such as additional ships, suitable terrain and more.. so keep it bookmarked!