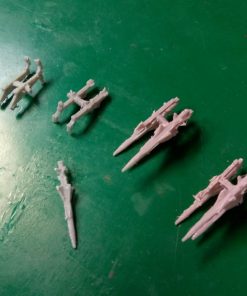 A Rapier FSA model is available on this site. This product converts this model from Field Standard A (FSA) to Field Standard B2 (Rapier FSB2) by providing replacement missile launcher arms supporting 6 missiles rather than the 4 on the earlier standard. The Rapier FSA product is required to generate a complete model. FSB1 retained the 4-missile arms, but added the Blindfire capability. FSC, also known as Rapier 2000, the current in-service version, was a major upgrade and almost a new system.

Information on the various Rapier versions is available at https://en.wikipedia.org/wiki/Rapier_(missile), with additional information at https://www.realitymod.com/forum/showthread.php?t=111643.

Three different implementations of the launcher arms are provided. The first splits each element in half to permit printing on the flat to ease removal of supports for the protective bars on either side of the missile, but is quite fiddly to assemble. The second version is a ‘full’ version with these protective bars, but not split, and the final version removes the protective bars for ease of printing and assembly. Users should select the version that meets their requirements for fidelity and the capabilities of their printer, but the simplest is recommended for wargaming models.

Towing vehicles are available for the Rapier system to complement this add-on.