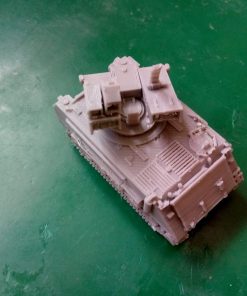 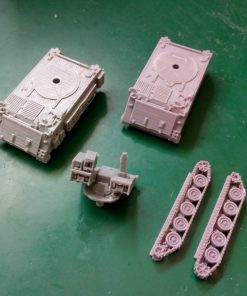 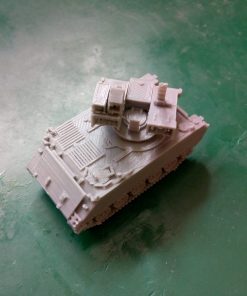 The Spike NLOS missile is a member of the widely-exported Israeli Spike anti-tank missile system. It was partly funded by the UK to fulfil a requirement for a long-range, portable, visually targeted missile. Such a system can reduce collateral damage, as target confirmation can occur late in the missile’s flight. The Israeli army used the system on M113 and M48 platforms for many years, and the UK purchased and leased the M113 version to fulfil an urgent operational requirement in Afghanistan (as Exactor-1). Further information can be found at https://www.thinkdefence.co.uk/uk-complex-weapons/exactor/ and http://beyondthesprues.com/Forum/index.php?topic=1282.300.

This product is a model of the Spike NLOS system mounted on a modified M113A1 platform. Two chasses are provided, one reflecting the UK version (less external storage), and a second the Israeli Hafiz system. The wheels/tracks are more detailed than that offered on some of the free M113 models at this scale, and are provided as separate parts. Some care needs to be taken to print the tracks in the optimum orientation, which may depend on the printer used. On an Ender-3, the best settings seem to be to print with the tracks with axles parallel to the print surface, and the track surface that contacts the ground on the print surface. Supports are required from the base only (Cura definition), and a 0.1mm step is recommended.

The turret is modelled as close as possible to the scaled actual unit, but no drawings are available, so dimensions have been estimated from photographs. Supports are required everywhere (Cura definition). A post is provided for a machine-gun (GPMG), if required, but this is not mounted on all units.

Further testing revealed that the idler wheel did not print correctly in all cases. Accordingly, the relevant files have been updated and the revised zip file uploaded to this product (8th July 2019).