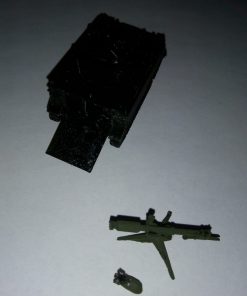 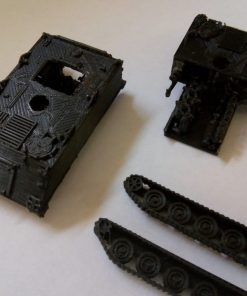 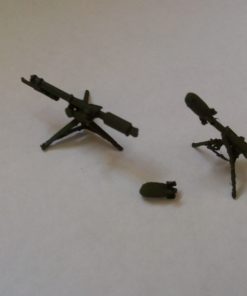 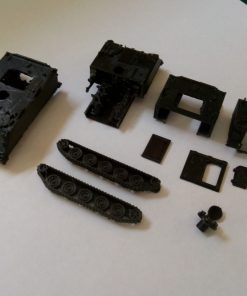 The M28/M29 Davy Crockett nuclear delivery system was a Cold War weapon developed to combat attacking troop concentrations or choke points. It was a tactical nuclear recoilless gun (smoothbore) for firing the M-388 nuclear projectile that was deployed by the United States during the Cold War. It was one of the smallest nuclear weapon systems ever built, with a yield between 10 and 20 tons TNT equivalent (40–80 gigajoules). The larger M29 variant, modelled here, had a range of 4km, and was transported on either an M113 or a Jeep, but the latter fell into disfavour due to a lack of effective mobility.

Production of the Davy Crockett began at Picatinny Arsenal following the 15 August 1958 approval of the design, with a total of 2,100 being made. The weapon was tested between 1962 and 1968 in Hawaii, with 714 M101 spotter rounds (not live warheads) being fired. A live trial of the warhead in Nevada was the last US above ground nuclear test. The weapon was deployed with US Army forces from 1961 to 1971, principally in Germany, Korea and Hawaii (for deployment in the Pacific area). It was removed from US Army Europe (in West Germany) in August 1967.

Further information on this interesting system can be found at https://www.militaryfactory.com/smallarms/detail.asp?smallarms_id=570 and https://www.youtube.com/watch?v=fReCrjZ6iVc.

The model includes the deployed recoilless weapon with the nuclear warhead mounted on the end of the barrel, ready for firing. It also includes a modified M113 with the relevant internal detail i.e. the fittings to carry the Davy Crockett weapon and its supporting hardware. This is a variant of the base M113 that is also available on this site. Several versions of this variant of the M113 are provided to permit the user to optimise the print. A complete version with tracks is available for resin printers, should this be desired. Two ‘hollow’ versions without tracks are provided, one with the Davy Crockett launcher and warhead removed for external deployment (use the model provided), and one fully equipped with six warheads and the launcher etc in the cargo area. A final split version is provided with the rear of the hull as a separate part in case removal of supports proves to be difficult (I found this to be the case). Separate handed track assemblies are provided, that should be printed with the axles vertical and supports only from the base. There appear to be two versions of the warhead (different shapes), so two alternatives are provided for user selection.

As a bonus, I have added a model of the smaller M28, but this is not easy to print on fused filament printers.

There are some uncertainties in the overall dimensions, as I have not been able to see a Davy Crockett unit and check measurements – please note this. Should additional information become available, I will gladly update the model if required.