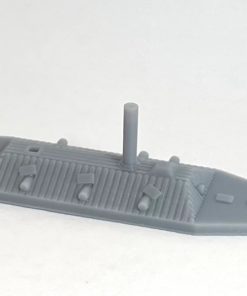 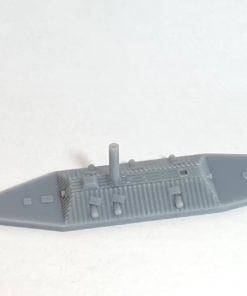 This is a model of the ironclad CSS Atlanta, one of the most powerful Confederate ironclads, which engaged two Passaic class monitors in Wassaw Sound.

The casemate ironclad CSS Atlanta was converted from the Scottish-built Finegal in 1862. It was considered to be one of the most powerful confederate ironclads. On 17 June 1863, it engaged the Passaic class monitors USS Weehawken and USS Nahant in Wassaw Sound. After running aground, Atlanta was damaged by shots from Weehawken’s from the 15-inch Dahlgren gun and surrendered. She was later put into Union service, where she served on the James River. After the war, she was sold to Haiti, but sank when being transferred.

I started to create digital terrain models because I could not find what I was looking for. At the moment, I have Austrian village buildings for 2mm-6mm napoleonic games, but I hope to be able to offer more models in the future.

The buildings in the image above are my models, the figures are from the fabulous 6mm range by MCminiatures, which can be found on this website.

More Products from The Raft Miniatures

Be the first to review “CSS Atlanta” Cancel reply