(with apologies to the late, great Johnny Cash)

As soon as railways were widely introduced in the mid-19th century, progressive Armies soon saw the advantage of employing them for both strategic and tactical purposes. The logistical benefit of rail systems to move men and supplies was evident in the American Civil War, and both sides sent out raiding parties to damage their opponent’s rail transport systems. General Sherman’s march across Georgia included a concentrated effort to destroy the Confederate rail system.

The German tightly scheduled railway mobilization in August 1914 allowed them to rapidly move large troop formations between their East and West fronts, in reaction to the fluid situation on the front lines. 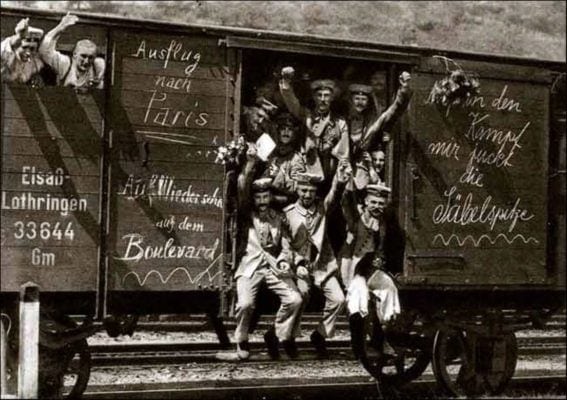 The strategic use of rail systems remained integral to all armies in World War 2, but it was also used in a more tactical sense in most theatres. Partisans frequently made attacks on railway systems and on specific trains, and occupying forces used trains to react to partisan actions.

The only mention of trains in Bolt Action that I am aware of is in the “Germany Strikes” campaign book. i am quoting from that book below:

The book continues on with several armoured trains and the various components thereof, but I want to just focus on “regular” trains themselves, as they provide both good ‘eye candy’ to the table and can be easily incorporated into scenarios or used as an option to bring reserves onto the table.

I will follow on with some suggested rules and point costs for additional rail cars later in this article.

I have several models from the Sarissa train system, and this is not a knock against Sarissa, who make great stuff and have a huge inventory of available terrain models…. but their train has a track system that has sections that are very awkward to join together on the table, and the track itself is out of scale; the outer measure of the rails is 35mm, which in 1/56th scale is equal to over 7’, while the standard interior distance between the rails for European rail is 4’9” and 5’ for the Russian rail system.

The MDF rail cars and locomotives are restricted due to the nature of .MDF and their construction, at least in my experience, included a fair bit of cursing.

So I set out to develop a 28mm scale train system that will allow you to print a complete rail system as well the component of the train itself.

The system includes five different pieces, to allow a lot of variation in set up. Included are the following 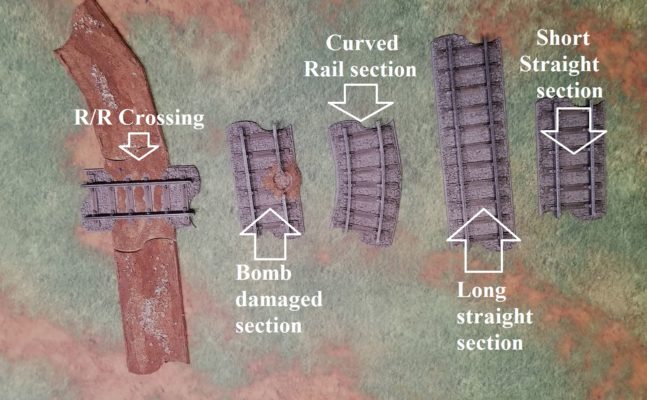 The pieces interconnect with a small coupling that fits into a “C” bracket on the front and rear of each car and locomotive, to allow them to remain in place through normal game play. There is a file for individual rail car couplings, although two are included in each set of rail car wheels file. 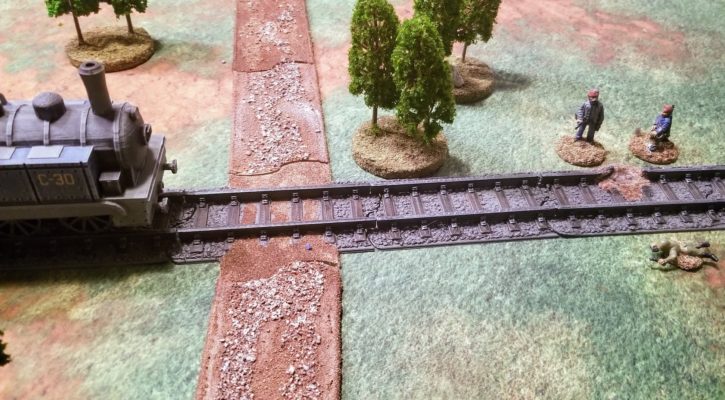 The road system shown is available for a free download on this site at this link:

The locomotive is a generic design, representing a small locomotive with an integral coal tender. I designed it from reviewing common designs used throughout Europe in the 1930s and early 1940s. A locomotive is required to move any and all rail rolling stock. 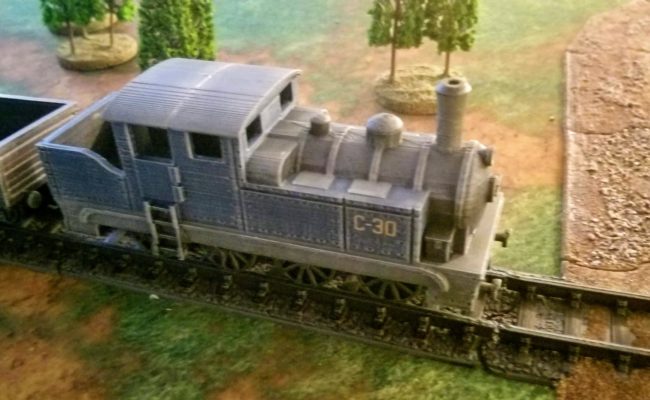 Again, the design is generic and represents a small passenger car (this isn’t meant to represent a transcontinental railway car, but a small one used for local routes). The roof is removable on the model.

If you consider the proposed rules, the occupants can use the car as “soft cover” if the train is stationary, and as pert buildings, up to two men per opening can fire their weapons. Due to the fact the passenger car has more openings than the box car, the passenger car is costed slightly higher.

Again, the design is generic and represents a standard box car The roof is removable on the model.

If you consider the proposed rules, the occupants can use the car as “soft cover” if the train is stationary, and as pert buildings, up to two men per opening can fire their weapons.

The following is a Railway themed scenario that I have play tested and adjusted; it is intended as more in the line with fun than historical recreation, but it works well, is a lot of fun and it uses some less commonly seen Bolt Action units and weapons.

Where can I find these stls?

The stls are available as both a separate train system (the locomotive and the four different rail cars) and a separate track system ( the five different track pieces) as well as a package with the entire train and rail system at a discount. This offers someone who just wants the train tracks as a terrain feature to buy the .stl for that; while someone else may wish to buy the train stls alone and rework the wheel spacing to fit a track system they currently own. The whole package (trains and track) is priced at a discount.

I also have an armoured train system being test printed and will have it loaded within a few weeks. It will work on the same rail system.

3 thoughts on “I Hear a Train a Coming…”