It’s suggested you can identify someone’s nationality by the answer they give when asked “When did the Second World War start?”. Some Americans would suggest December 7th, 1941. Commonwealth nations and Poles would say September 1939. Residents of the former Soviet Union would likely answer June 22, 1941.

Those with a Central Asian origin might suggest July 1937, or even as far back a 1932, as two major combatants- Imperial Japan and China – were already engaged in heavy fighting involving literally millions of men in a brutal and savage conflict that did not end in August 1945. For the chinese the war continued as the Chinese Civil War and lasted another four years before the Nationalists were forced from mainland China to the island of Formosa.

The Sino-Japanese conflict gets scant attention in the West, and it is unfortunate because understanding that conflict itself as well as the events that led to it would help us all understand today’s geo-political landscape.

I can hear you – “we just want to game; we aren’t listening to NPR!” . Okay, all of us have at least ONE Bolt Action army of a major combatant – invariably German, Soviet and at least one Western ally – American or British commonwealth. Many of us have multiple armies…. But who has a Chinese Army? Amazingly Bolt Action allows us not one, not two but three distinct Chinese Armies, each with its own unique units and options. With the new release of the Korea campaign book, you may want to revisit the Chinese Army list, as you may well get some double duty from the figures.

How to Play a bolt Action Chinese Army

If you want an entertaining and informative overview of playing Chinese in Bolt Action, you cannot do better that listen to the SNAFU “Gang of Four”. Hopefully you are already subscribed to their podcast and perhaps are even patreon supporters, but if not please have a listen here:

As for building a Chinese Army (again, you can field three separate and distinct armies – the KMT (Nationalists), the Communist Red Army, and a Warlord Army. An excellent article on sourcing figures can be found here.

With the new Korea book release, we can safely anticipate some new figure releases from Warlord games. At the time of writing the only figures shown on the Warlord website is a DPRK (North Korean) reinforced platoon bundle, but surely there are more forthcoming.

Not claiming to be psychic, but I would think many of the Chi-Com (“Chinese-Communists”) figures forthcoming for Korea would fit at least the Chinese communists in WW2, if not other two factions as well. The KMT (Nationalist) Chinese were alternatively supplied by Germany, the Soviet Union the United States, as well as other nations, so just about anything goes in the way of weapons and uniforms.

Other that kit-bashing German/soviet/Japanese plastic figures, you can buy 28mm metals from various sources. Here are some:

Brigade games has a good selection of Chinese Troops, with German equipment – helmets, small arms, etc. This represents the strong influence the Germans had in supplying and advising the Nationalist Chinese up until the Germany’s signing of the Pact of Steel with Japan. The Germans supplied with Nationalists with Pz 1 tanks and Sd.Kfz. 222 Armoured cars, small arms, AT guns, as well as military advisors. 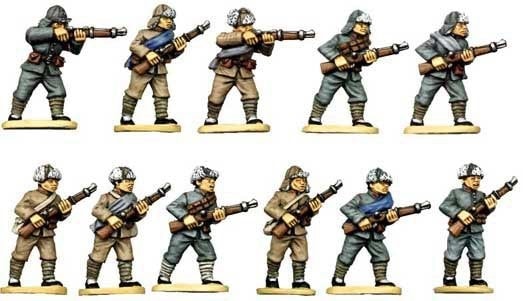 Copplestone crafts a wide range of 28mm miniatures for their “Back from Beyond” interwar series. These figures work great for building whatever Chinese army who may wish to build, and many will transfer well into 1950 Korea as well, such as these winter clad riflemen. There are many more, including some rough looking bandit figures who would work well as the “free” inexperienced infantry squad the Chinese BA players get. 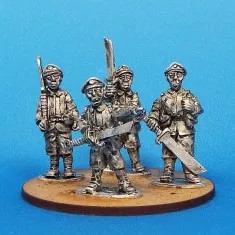 1st Corps miniatures have an interesting line of figures and include a few different packs of Chinese figures. The photo shows figures known in the Chinese Army list as “Big Sword” squads. They are just that – close quarter sections armed with small arms and a honking huge sword. Copplestone also has figures for the same “Big Sword” squads. Worthy considering in any Chinese Army allowing same. The Big Sword squads are fanatic, tough fighters and have the “reckless charge” attribute!

1st Corps also has a full Chi-Com infantry squad for Korea, which would be right at home in WW2 China.

Check out the lists on easyarmy.com for the three different Chinese armies, and their special rules.

3D printing for a Chinese Army

As noted, the Chinese – no matter what faction – were desperate for armaments. The country had been wracked by war, poverty, corruption, and international interference for decades if not centuries. Yet the geo-political prize was too great to ignore, so many nations sought to gain influence by arming one or more sides. You will find Italian tankettes, Russian tanks, German machine guns and American planes all fighting with the Nationalists forces all at the same time in the late 1930s. It may be easier to list the weapons NOT used in China than list those actual employed.

Rather than string a lengthy list of AFVs, a helpful review of what tanks, armoured cars and other vehicles were used historically by the various Chinese armies can be found here:

But don’t you have a file to offer us?

Sorry about the painfully long lead up… Yes, indeed I do. I am fascinated with the oddities in AFV design that are born of imagination and necessity. One of the fruits of that union was the Sutton Skunk. The history of the skunk is worthy of its own movie; the creator is one of those incredible adventurers/inventors that seemed to be so prevalent in the early 20th century. Rather than repeat the incredible story of the Sutton Skunk and its inventor, Francis Sutton, I will just add this link. Seriously, it’s a story that has everything.

The Skunk is unlike any other AFV in your collection. Seriously. It has not one but two medium mortars that fire from under armour from its rear – hence the name “Skunk” – plus two BARs firing from the front. Yes, it won’t last on a stand-up fight with a Tiger, but it wasn’t meant to. “In the land of the blind, a one-eyed man is King”. In battle with lightly equipped early war troops of any nation, a Skunk could spoil the best laid plans. 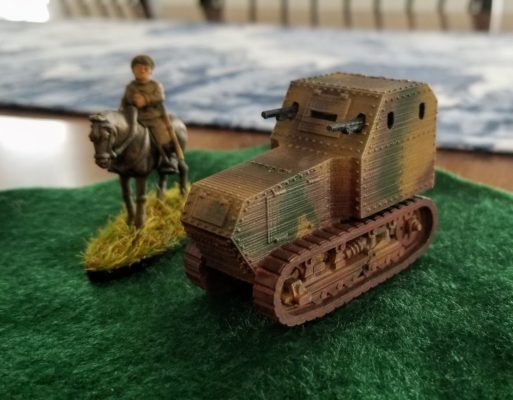 The file is 90% original. I did borrow the track system from Bergman’s Holt tractor and adapted it. The hull and the rest are original. Dimensions are hard to come by, but I used the actual diagram in the tank encyclopedia article which shows some height and length stats and worked from there.

There are seven parts; the tracks (x2) the hull, the BAR barrels and nubs for mortar barrels. As always print at 0.1 layers with supports, and trim support material off carefully.

The file is available here: