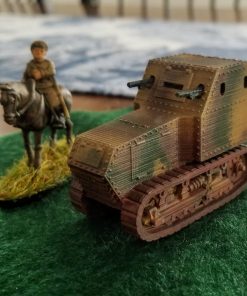 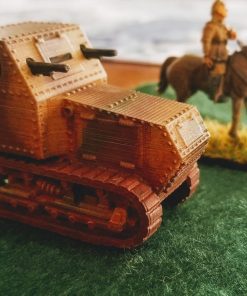 This is an .stl to allow you to print a Chinese Skunk tank for use in Bolt Action gaming. I have loaded it as a free file (licensing restrictions still apply) to possibly encourage some players to branch out and consider fielding a Chinese BA army.

Rather than repeat the incredible story of the Sutton Skunk and its inventor, Francis SUTTON, I will just add this link. Seriously, it’s a story that has everything.

The Skunk is unlike any other AFV in your collection. Seriously. It has not one but two medium mortars that firer from under armour from its rear – hence the name “Skunk” – plus two BARs firing from the front. Yes, it won’t last on a stand-up fight with a Tiger, but it wasn’t meant to. “In the land of the blind, a one-eyed man is King”. In battle with lightly equipped early war troops of any nation, a Skunk could spoil the best laid plans.

The file is 90% original. I did borrow the track system from Bergman’s Holt tractor and adapted it. The hull and the rest are original. Dimensions are hard to come by, but I used the actual diagram in the tank encyclopedia article which shows some height and length stats and worked from there.

There are seven parts; the tracks (x2) the hull, the BAR barrels and nubs for mortar barrels. As always print at 0.1 layers with supports, and trim support material off carefully.