By the Rocket’s Red Glare…

Rockets were first employed in warfare almost as soon as man discovered gunpowder. The first record of their use was in 1232, during the Battle of Kai-Keng. The Chinese defenders repelled the Mongol invaders by a barrage of “arrows of flying fire.” These fire-arrows were a simple form of a solid-propellant rocket.

The British used rockets as a form of artillery starting in the early 19th century, employing a series of Congreve rockets, named after their inventor, William Cosgreve. The Congreve rockets were used by the British extensively in the Napoleonic Wars. The use of rockets by the British is recorded for posterity in the American national anthem, “The Star-Spangled Banner”, where the use of the Cosgreve rockets during the British siege on Fort McHenry during the War of 1812 is recounted as “And the rocket’s red glare, the bombs bursting in air”.

Later in the same century, the British improved the anemic performance of the Cosgreve rockets with the Hale and Boxer rockets, both designs improving the accuracy and reliability of the rockets used by the Royal Artillery. They were used in “Queen Victoria’s Little Wars” in the latter part of the 19th Century.

Rockets were developed in the 20th century by many nations, but for various divergent goals. The British experimented with unguided anti-aircraft rockets in the late 1930s, and later employed these in batteries in the mid and late war period. It was these rockets that ended up being re-purposed in the “Land Mattress” rocket launcher used by British and Canadian forces in North West Europe in the late war period.

The Soviet Union were experimenting with multi-tubed rocket launchers in the 1930s, and employed the first designs during Operation Barbarossa, with the BM-13, which later acquired the nickname “Katyusha”, the name of a girl in a popular wartime love song about a Soviet girl pining for her soldier boyfriend.

The classification of soviet rockets is made by their rocket diameter; e.g. the BM-13 means it is a rocket launcher, is mobile (the “M”) and the rocket size is 13 cms. – actually 132 mm, or just over 5”.

The Soviets employed these BM-13 rockets as well as other sizes and designs, and although not accurate – they were truly “area weapons”- the terrifying sound and incredible destruction they wrought earned them the nickname “Stalin’s Organ” from the Axis troops on the receiving end. A barrage of rockets was normally a sure sign of an impending attack.

The Soviets, of course, mounted these launchers on trucks, on redundant tanks,on tractiors, and used as simple frames set on the ground, much like the Germans did with their “Howling Cow” launchers.

Bolt Action Player who field Soviet Armies are no doubt familiar with the popular “Katyusha” rocket launcher, offered by not only Warlord Games but by other plastic and resin model manufacturers. It, however, isn’t the only multi-launcher available to the Soviet player. In the Ostfront theatre book, the Soviet M-30-4 is offered to the Soviet player. It is classed as a “multiple launcher” with a 5-man crew, fixed, firing HE – 3D6 – rockets . The special “slow to load”; its own crew, when it fires, suffers D3 pins. It must then be given a “rally” order before it can be issued another “fire” order.

Well, that is a bit of a bummer…

Yeah, but there is something special about the M-30-4. It is the only multiple launcher that I know of in the game that can take a spotter for an extra 10 points. This means you can place your M-30-4 somewhere tucked out of harm’s way and have your small team / always down spotter plot your target. That is something pretty sweet for the Motherland.

There are very few references to the M-30-4 on-line. I took the design from pics of other kits I found on google searches, and references on some Russian sites. The actual .stl file I designed represents the pack of four crated M-30 rockets on the simple frame. Any five Soviet gun crew figures can be used as its crew.

Now this is important. The Rockets themselves is best printed, and this is important, with “Support ONLY from the build plate”. I did several test prints with support “everywhere” and it was a nightmare to clean from the print. I tried a print with the “build plate only” support and it was incredible – see these uncleaned prints- 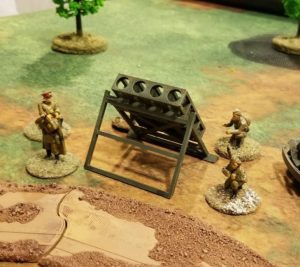 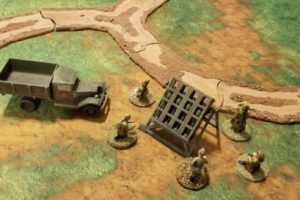 The print is available to the marketplace for Wargaming3D for $3. It is a relatively simple file but took a lot of time and test prints to get to be workable. I think a Red Army player may want to give it a look.