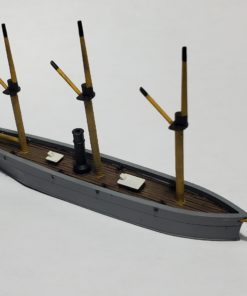 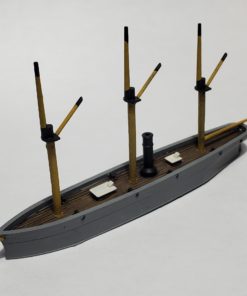 Dueled with the Charleston ironclads!

Mercedita, like a great many gunboats, was built as a civilian steamer and bought by the Union Navy at the outbreak of war. She was assigned as part of the blockade in the Gulf of Mexico where she captured several blockade runners. She was then assigned to blockade Charleston where she was part of the raid by the ironclads Chicora and Palmetto State. She was the first ship that the enemy ironclads encountered and she was promptly rammed and forced to strike her colors. The ironclad raiders were eager to see more action and Mercedita was quickly abandoned as they moved on to engage other blockading ships. She made some hasty repairs and set off for Port Royal and Philadelphia for more extensive repairs. Once fully repaired, she once again blockaded the Gulf of Mexico and saw little action during her time here. Once the war had ended she made a few calls in Central American ports to calm tensions before returning home and being sold at auction in 1865, returning her to civilian service.

USS Mercedita with base

Be the first to review “USS Mercedita” Cancel reply