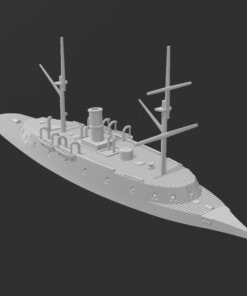 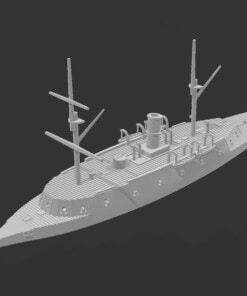 Bought by the French!

Laid down in 1862 with the name Dunderberg (meaning thundering mountain in Swedish) she had quite a different design than the one she was launched with. Originally, she was shorter in length and meant to have a smaller casemate with turrets fore and aft. However part way through construction the turrets were deleted during construction and the hull and casemate were extended. These changes would make Dunderberg the longest wooden ship constructed at an astonishing 377′ 4″. These changes, as well as numerous others, greatly delayed the launch of the ship and she wasn’t launched until July 1865 after the war had ended. The USN rejected the ship for navy service, and she was put up for sale to the highest bidder. Proposals from Peru and Chile were rejected as they were both at war with Spain, and the US did not want to put any bias behind a lawsuit with Great Britain over selling ships to the Confederacy. With tensions rising in Europe in the late-1860s, foreign minister of Prussia, Otto von Bismarck, expressed some interest in purchasing the ship, thinking that it would be quite the show of force to France. Over fear of this sale taking place, Napoleon III of France almost immediately put in his own bid for the ship and she was sold and put into French service as Rochambeau. The ship went through a refit to update her to French armament and to take measurements and was then placed in ordinary until she was recommissioned in 1870 to participate in the Franco-Prussian War. She saw no action and her crew was soon decommissioned and her crew sent to defend Paris. She was removed from the French naval record in 1872 and scrapped at some point in 1874.

Physical prints of these models are available from our friends at XP Forge! https://xpforge.com/collections/confederate-naval-miniatures

As well as our friends at Models n Miniatures!

Be the first to review “USS Dunderberg/Rochambeau” Cancel reply