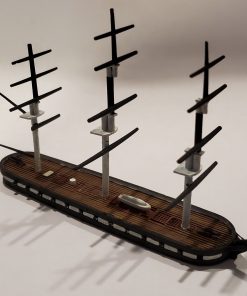 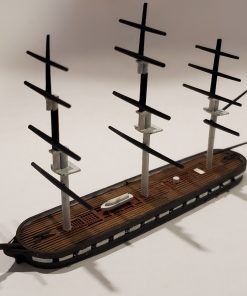 USS Cumberland was originally built in 1841 as a 50-gun frigate. She was sent to patrol in the Mediterranean for a short time before returning to serve in the Gulf of Mexico during the Mexican-American War. After the war, she returned to the Mediterranean for another two patrols to enforce American neutrality. When she returned to the US, she was sent to Charleston Navy Yard and was converted from a 50-gun frigate down to a 28-gun sloop of war. After the conversion was complete, Cumberland was sent to patrol along the western coast of Africa searching for ships transporting slaves. She nearly captured one, but was forced to let the ship go due to insufficient evidence. Upon the outbreak of the Civil War she returned to the US and became part of the Union blockade in Hampton Roads after escaping the destruction of Gosport Navy Yard. She was anchored off the southern coast of the peninsula near Newport News when the Confederate ironclad CSS Virginia dealt the fatal blow with her ram. Ironically, before she was sunk, Cumberland caused more damage to Virginia than the Monitor would the next day. While trying to fend off the ironclad, Cumberland destroyed two of the Virginia’s guns, caused minor internal damage, and tore off her deadly ram. Today the remains of the Cumberland remain where she sank, just off the main shipping channel in the James River. Her wreck has been subject to several salvage operations in the last 150 years, several of these taking place shortly after her sinking, several more recent. Many of her artifacts are on display at the Hampton Roads Naval Museum.

USS Cumberland with base

Be the first to review “USS Cumberland” Cancel reply