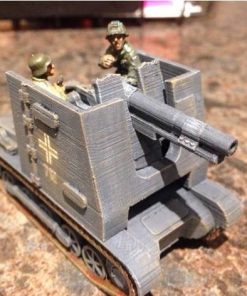 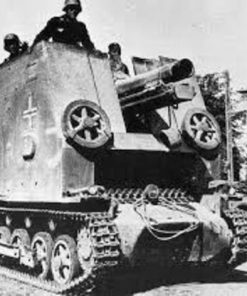 This is a package of two separate files, both printing the same model, but one is simplified (4 printed parts) and second is more defined with 8 printed parts. This was created with FDM printing in mind.

This is a 28mm rendition of the German “Bison” SPG mounting the 150mm howitzer. It was built on the hull of a Pz Mark 1(b) light tank and first used in the invasion of France.

I started with several of Tiger Ace’s files, I used the hull of his Pz 1(b), used the actual Sig 33 from his German Heavy Artillery bundle, and reworked the armoured cab of his Bison. from there I up-scaled it all to 28mm,
and’

The model in the pics is my test print. It has not been glued; the pieces are tight enough to lock in just with a “press fit”. you will have to glue them together of course, but alignment shouldn’t be an issue.
As always, be careful removing the support material
The tracks will fit recesses in the hull, to ease proper assembly.
Test fit before applying glue and assembling.

I printed this at the request of a friend from out club. I do not field any German forces, so it is not yet painted. I was surprised that the model turned out the size it did (just over 83 mm) but the length is exactly 1/56th of this vehicle’s length as described in Tank Encyclopedia (4670mm divided by 56 = 83.3mm). If anyone feels the scale isn’t correct, please feel free to adjust as you feel necessary.

Alone included is a modified version of my previous file for the same vehicle. I realized the file was actually more complex than some may think it needed to be – particularly if you are reducing it to print at 20mm – so I combined the hull, the upper body structure and the gun carriage and wheels into a single piece. The gun barrel and tracks remain the same. It reduces the not inconsiderable print time for this model by about 1.5 hours at fine (0.1 mm) settings. 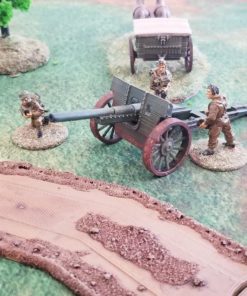