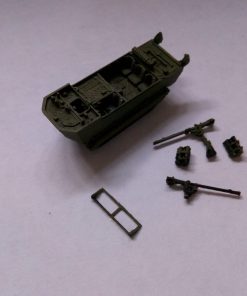 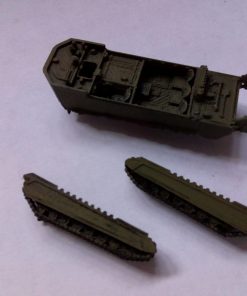 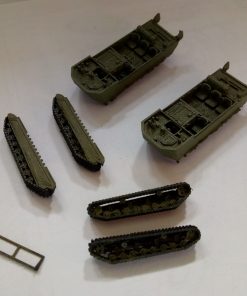 The M29C Water Weasel was a derivative of the M29 Weasel (qv). The main development was the addition of flotation chambers to the front and rear of the vehicle, and twin rudders, to provide enhanced amphibious capability. This was limited to inland waterways, as its use in surf or rough water was limited by restricted freeboard, but it served with distinction in the Pacific theatre in WW2, in Korea, and extensively in Vietnam. Both the Weasels served in the US Army, US Marines, British and French armies until the 1970s. Further information can be found at http://www.tanks-encyclopedia.com/ww2/US/cargo-carrier-m29-weasel and https://www.warhistoryonline.com/instant-articles/m29-weasel-in-photos.html.

This model is a modified version of the 1:56 scale design to ease printing at 1:100 scale. It is provided in two forms to suit different printing requirements. An integrated design with shrouded tracks is provided, and a body-only variant with separate tracks permits the use of both shrouded and non-shrouded tracks to suit the wargamer’s needs. The latter has two variants, one with and one without a radio fitting. Add-on packs provide a 75mm M20 recoilless rifle with ammunition. The windscreen is provided as a separate item to simplify printing. Some fitting of the tracks into the body slots may be required, depending on the fidelity of the printer at this small scale.