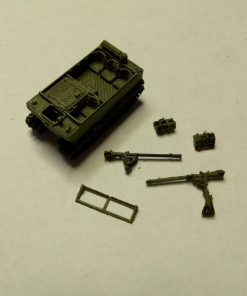 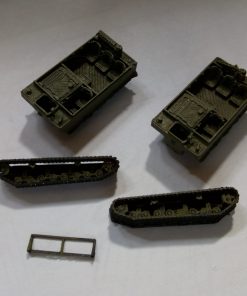 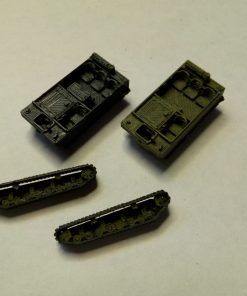 The Weasel was initially envisaged as a cross-snow vehicle to attack German installations in Norway associated with the production of heavy water. It evolved into a general purpose light vehicle ideal for supplying front-line troops over difficult ground when wheeled vehicles were struggling. The vehicle was produced by Cadillac in the US, but used by several Allied nations in Europe and the Pacific, where its limited amphibious capability and good performance in marshy ground, as well as snow, was invaluable.

The M29 was a front-engined, rear-drive tracked vehicle with seats for four. It was often armed with machine guns of recoilless rifles, especially in later use in Vietnam. It proved reliable and popular, and was evolved into the M29C (separate model available) with added buoyancy chambers at front and rear and rudders. Further information can be found at https://en.wikipedia.org/wiki/M29_Weasel and http://ww.tanks-encyclopedia.com/ww2/US/cargo-carrier-m29-weasel.

This product offers the M29 Weasel in several formats to ease printing, as it is a small model. It is a modified and strengthened version of the 1:56 model to enable printing at this scale. A version with separate hull and tracks is provided, as is an integrated version as an alternative for resin printers. A separate hull is provided to depict the version equipped with a radio. The windscreen (strengthened) is provided as a separate part. A 75mm rifle and ammunition packs are provided to permit the armed version of the Weasel to be modelled. The windscreen is a separate component to ease printing. Some fitting is likely to be required at this small scale to ensure that the tracks fit snugly into the hull recesses, depending on the characteristics of the printer used.