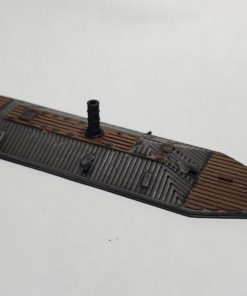 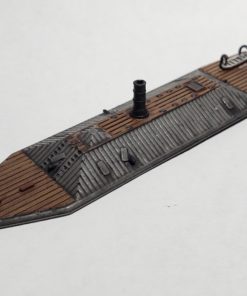 Not as great as everyone says!

Originally built as the blockade runner Fingal, she made one run from England before becoming trapped in the Georgia estuaries by the Yankee blockade. She was soon slated to be converted into the ironclad Atlanta. She had sponsons added to the sides of her hull to support the casemate, and was armed with two 7″ Brooke Rifles on pivot mounts, two 6.4″ Brooke Rifles, a solid iron ram, and a spar torpedo. She is often known as one of the most powerful ironclads built by the confederacy, but this is not necessarily the case. After her conversion into an ironclad, her sea trials determined that she was difficult to steer, leaked like a sieve, and the conversion added more weight than was anticipated, greatly reducing her speed and increasing her draft, a problem that would soon become very apparent. Her guns also had a very limited traverse and elevation due to the very narrow gun ports. Another issue made during construction, was the severe lack of circulation inside the ship. One officer stated in his diary that Atlanta was a “comfortless, infernal, and God-forsaken ship!” Atlanta made several sorties to engage the blockade, but was thwarted each time by a variety of reasons. She finally made a successful sortie, despite the suggestion that she wait until the ironclad Savannah was completed, into Wassaw Sound on June 17, 1863. This engagement would ultimately prove disastrous for Atlanta as she soon grounded and was captured by the monitors. She was then placed into Union service and had all her Brooke rifles replaced with Parrott rifles. She was then sent up the James River to support operations against Richmond. After the war, she was placed in ordinary and sold to Haiti, which was in the middle of its own civil war. The ship was briefly seized by customs, for possible violations of neutrality laws, but was soon released. She sail for Haiti, but never arrived, vanishing somewhere en route. It is believed she went missing somewhere off the Delaware Capes or Cape Hatteras.

Be the first to review “CSS/USS Atlanta” Cancel reply