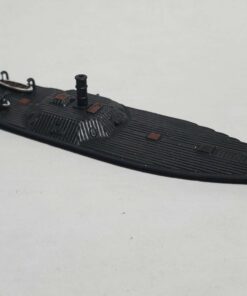 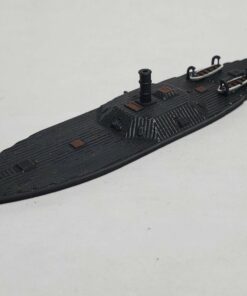 Built just outside Richmond, Virginia, Texas had her keel laid down in January 1865. She was left unfinished, but intact, when the city was abandoned in April 1865 only because the attempts to burn her were unsuccessful. She was captured when Richmond fell, and she was seized by the Yankees “for use in the Navy”. Soon after her seizure, her uninstalled armor and engines, along with her hull, were shipped down the James River to Norfolk where she was evaluated. She is reported to have been one of the best constructed Confederate ironclads. Her engines were installed at some point while in Norfolk because she was given a trial run by the Navy, this was the only time she ever sailed under her own power. She was laid up in Norfolk until 1867 when she was sold for scrap. Her name was used in the 2005 film Sahara, based on the novel written by Clive Cussler.

CSS Texas with base

Be the first to review “CSS Texas” Cancel reply