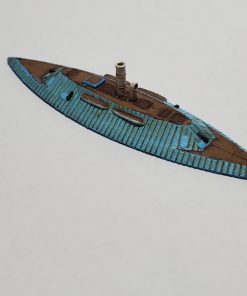 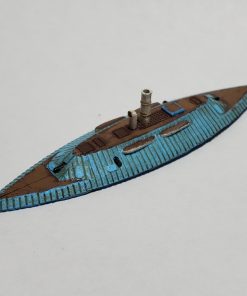 Launched in September 1862, Palmetto State defended Charleston until the city’s capture. Her crowning achievement during her career was an attack on the ships blockading Charleston Harbor. She and her sister Chicora crept through a thick fog and caught USS Mercedita by surprise, ramming her and dealing extensive damage. The ship surrendered and Palmetto State turned her guns on USS Keystone State, dealing minor damage, but getting a lucky hit and puncturing Keystone State’s steam chest rendering her inoperable. Any damage to Palmetto State and Chicora was minor, and the blockaders were forced to move farther out to sea, but in the big picture the attack was fruitless as the blockade remained unbroken. Palmetto State saw action once again during du Pont’s failed attacks, and her officers and crew participated in providing services during the evacuation of Fort Wagner and Battery Gregg. Palmetto State was set afire to avoid capture when Charleston fell in February 1865.

CSS Palmetto State with base

Be the first to review “CSS Palmetto State” Cancel reply