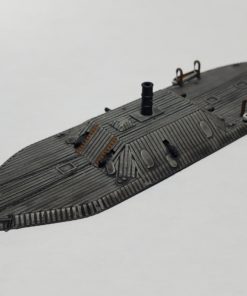 When Jackson was first laid down in 1862, she had a completely different name and configuration. She was originally built under the name Muscogee, and a sister to the ironclad Missouri. She had a similar sternwheel propulsion, with a long casemate built to protect the wheel. This configuration was unsuitable however, as it made her too heavy to be launched. She was redesigned with a shorter casemate and used propellers for propulsion rather than a sternwheel. She was finally launched in late 1864, although the common shortage of iron plate meant she was launched incomplete. Her name had been changed to Jackson at some point during the year, the exact time it was changed is unknown. After her launch, she sat on the Chattahoochee River at Columbus, Georgia for the remainder of the war. When the Yankees captured the town in April 1865, they set fire to her and cut her moorings. She drifted downriver until she grounded on a sandbar. The location of her wreck remained known, the Army Corps of Engineers had salvaged her machinery in 1910, and the remains of her wreck were raised in 1963. Jackson’s remains are now on display at the National Civil War Naval Museum in Columbus, Georgia.

USS Jackson with base

Be the first to review “CSS Jackson” Cancel reply