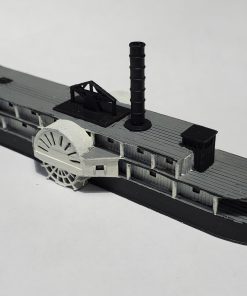 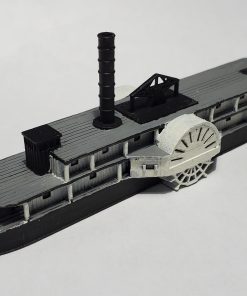 Captured by the Union!

Originally names Mexico, she was pressed into Confederate service and renamed CSS General Bragg. She was part of the River Defense Fleet, and took part in all actions as part of the fleet. At the Battle of Fort Pillow, she assisted CSS General Sumter in the crippling of USS Cincinnati. Six days later when the fleet was trapped at Memphis, she was forced aground and made to surrender. She was later repaired and placed into Union service on the Mississippi. She took part in many small actions and patrolled around Vicksburg defending against Confederate troop movements. In 1864, she was stationed at the mouth of the Red River to support the disaster that was to become the Red River Campaign. After the campaign, she returned to patrolling the Mississippi, and engaged a gun battery near Tunica Bend, Louisiana where she was fired at 32 times and was disabled in the fight. After the war ended, USS General Bragg was returned to civilian service under her original name Mexico. She was sold in 1870.

Be the first to review “CSS General Bragg” Cancel reply