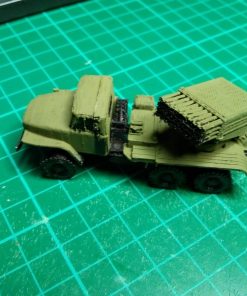 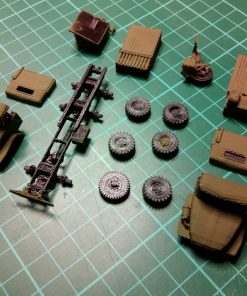 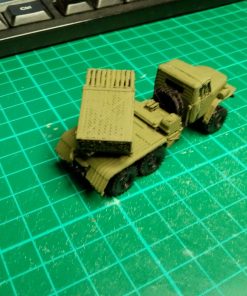 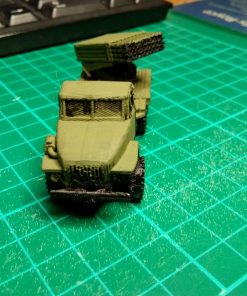 The BM-21 GRAD multiple rocket launching system was developed in the early 1960s but continues to be used on the URAL-4320 chassis in many countries. It was initially mounted on the URAL-375 (a version on this chassis can be made available on request), but the majority were exported on the later 4320 truck chassis.

The number of rockets that each vehicle is able to quickly bring to bear on an enemy target makes it effective, especially at shorter ranges. A battalion of eighteen launchers is able to deliver 720 rockets in a single volley. As the system has lower precision than typical artillery, it cannot be used in situations that call for pinpoint accuracy. It relies on a large number of shells dissipating over an area for a certain hit rate on specific targets. Nonetheless, because of the short warning time for the impact of the whole volley, the BM-21 is still considered an effective weapon. Further information can be found at https://en.wikipedia.org/wiki/BM-21_Grad or https://www.armyrecognition.com/russia_russian_army_vehicles_system_artillery_uk/bm-21_grad_9k51_mlrs_122mm_multiple_launch_rocket_system_data.html.

This model is divided into several parts to ease printing on FDM printers. A complete model is also provided for SLA printing (in two parts so that the launcher can rotate). The basic component is the chassis, and the spare wheel assembly should be glued on to this matching the fuel tank for location. The cab can then be abutted to this on the front (please ensure that this fit is snug), and the rear platform to overlap the fuel tank and be touching the other side of the spare wheel assembly. The launcher and barrels fit together, and can then be inserted to provide a rotatable final assembly. Wheels can be mounted when convenient, but some fitting is likely to be required, given the limitations of FDM printers with axle printing. Wheels on this vehicle are sided, as the treads are not symmetric.

Two versions of the cab are provided in split form, one with ‘solid’ windows, and one that is hollow, but might be more difficult to clean after printing.

The design file has been updated on 28 Feb 2020, as the base of the truck was missing – apologies!

A further update on 13th March 2020 in response to a comment that the cover on the launch tubes was to thin to print reliably. Versions of this component and the rotatable part in the SLA version are added in an extra file.