The Little Engine that could… pack some hurt!

Recently I posted an article on the tactical use of railways in military warfare in general, and specifically in WW2. I noted that as soon as railways came into widespread use, their military application was realized. Not long after that the potential was realized that one could use railways to do more than just move men and weapon but instead it could be used as a weapon. Again, it was the American Civil War that brought us the first use of armed trains; their use was both to quickly react to enemy incursions as well to protect the trains themselves. Lastly their guns could provide mobile fire support to field operations (so long as the railways was within range). 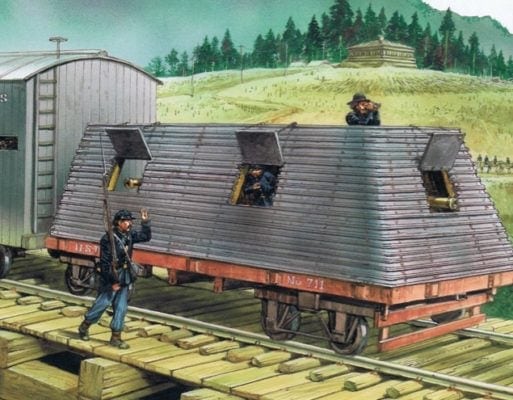 Armoured trains were employed by the British in the Second Boer War, where the British use ad-hoc armoured trains, armed with artillery, to protect their vital rail lines and to spearhead their relief operations to the encircled garrisons deep in Boer territory.

The Great War saw the use of armoured trains, particularly on the Eastern front, due to the large expanses of terrain that allowed for far more mobility in operations than did the static Western Front.

After the Armistice, fighting continued throughout Europe and armoured trains were employed by all side of the Russian Civil War and the Russo-Polish war.

In World War 2 the armoured train was still in the inventory of many combatants and was used in varying degrees of effectiveness.

On the lower tier of success was this armoured behemoth, the narrow-gauge British armoured train employed defending the Realm, Post Dunkirk. No doubt once this photo was released, Hitler tore up the plans for Operation Sea Lion and convinced himself that invading the USSR was by far an easier task.

The Poles employed their trains to fight the two-sided invasion by Germany and the Soviets, and several of their trains were then re-purposed by the Germans.

Most armoured train usage in WW2 was on the eastern front, where, as in WW1, the large land mass required secure rail systems to move men and material and were vulnerable to local attacks. 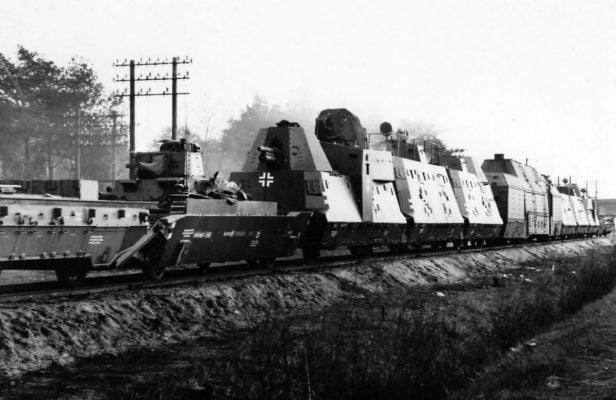 Armoured trains continued into use post war; the French employed armoured trains in their fight with the Viet Minh in the early 1950s.

I am only aware of one significant mention of Armoured trains in the plethora of Bolt Action books; that is in the “Germany Strikes” campaign book.

In addition to those rules, I have some suggested rules for using armoured trains in the game.

These suggestions are based on the “Vehicle Design System” which is an excellent supplement to determine point values for vehicles and weapon systems not specifically noted in game manuals.

When using any train in the game we must remember a few limitations; and because of these be a little forgiving, point wise, with those deploying trains. 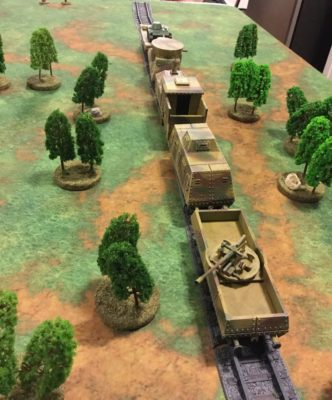 Few armoured trains were purpose built; most were repurposed for this role with bolted on armoured package. This locomotive is that sort of vehicle; the basic locomotive has been covered with armour sheets and the crew are protected from most threats.

It has no armament.

It is required to have any attached cars be mobile. 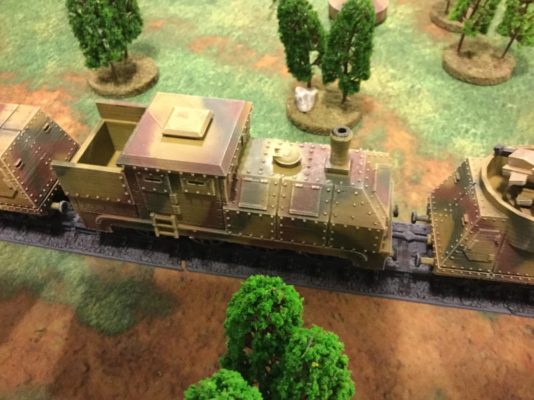 Trains are particularly vulnerable to aircraft attacks; unlike vehicles or infantry, trains can never hide now move into cover when enemy aircraft are overhead. Therefore the addition of anti-aircraft weapons to help deter air attack is prudent.

This is an armoured 7+ vehicle BUT has no mobility on its own. Therefore the value 50 points is reduced by 15 points (price of a standard “tow” vehicle) 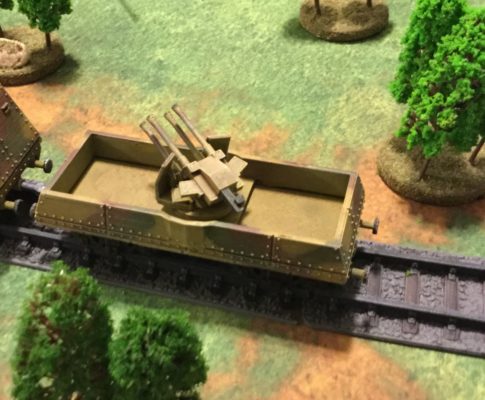 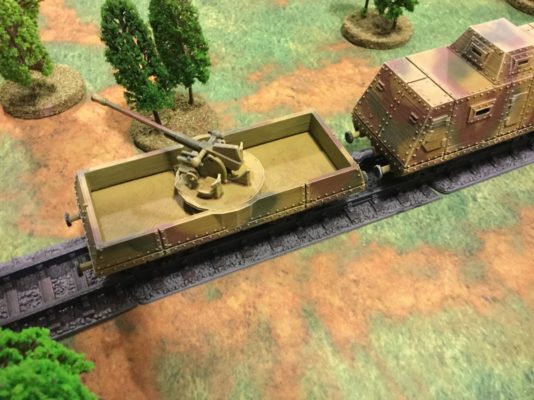 Armoured flat cars were often placed at the front of the train, to allow troops on that car to spot threats ahead on the track (explosives planted; ambushes in place etc.) as well as to carry armoured vehicles to be unloaded and spearhead a quick reaction force)

This is an armoured 7+ vehicle BUT has no mobility on its own. Therefore the value 50 points is reduced by 15 points (price of a standard “tow” vehicle) 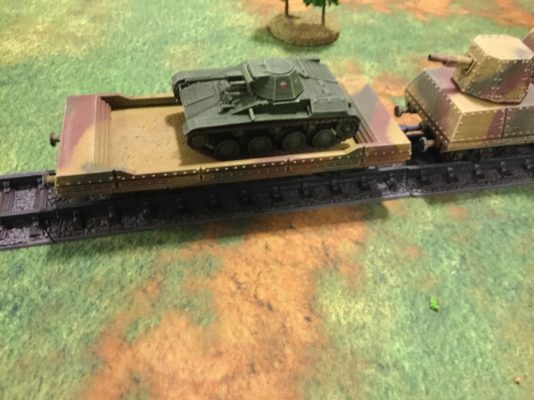 The armoured gun car carries a heavy punch; a light howitzer in a closed turret as well as various weapon packages, including fixed machine guns to deal with ground threats and various anti-aircraft armament, also brutally able to deal with ground forces.

Therefore the total cost per option would be 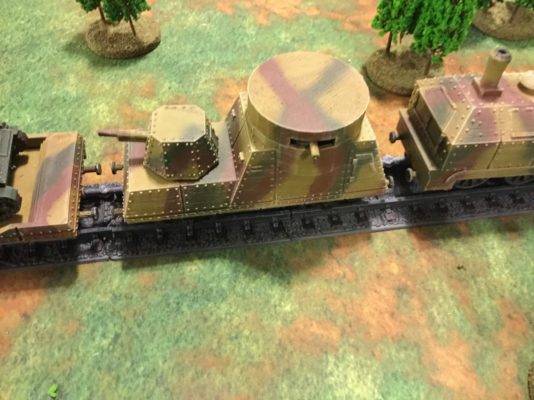 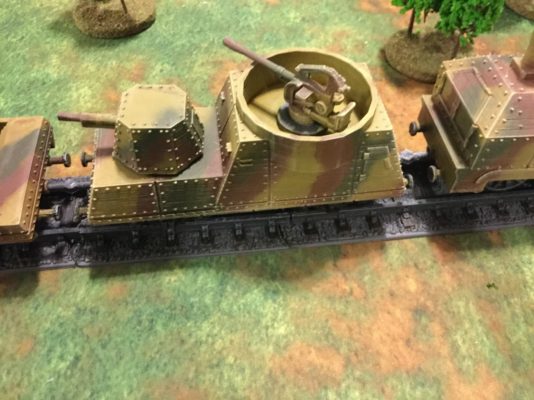 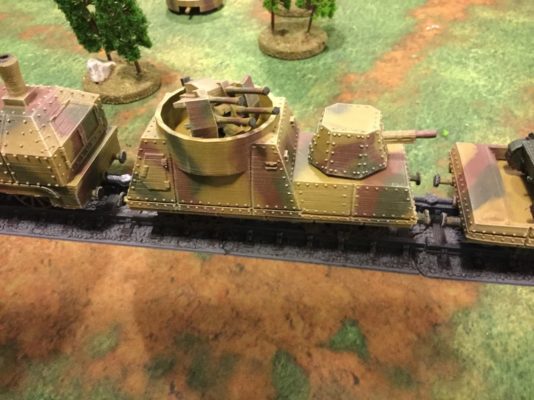 The armoured trains often carried fully enclosed cars for both HQ units as well as an infantry quick reaction force. These cars could be turned into mobile bunkers by mounting machine guns firing to the side arcs.

This is an armoured 7+ vehicle BUT has no mobility on its own. Therefore the value 50 points is reduced by 15 points (price of a standard “tow” vehicle) + 10 armoured all round = 45 points basic car

There the basic car costs 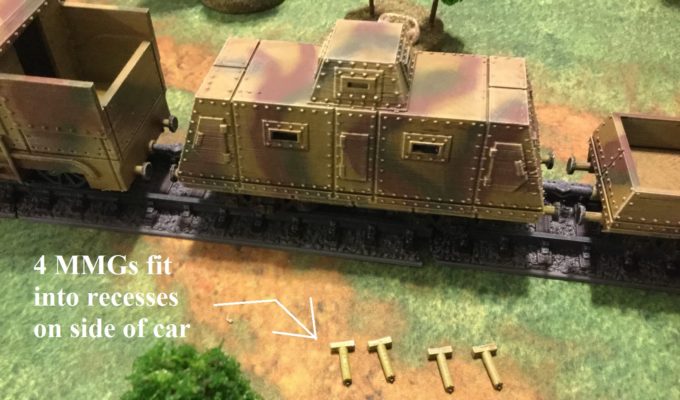 I purposely modeled these to be generic; the armoured train would accurately fit German, Soviet and Polish armies, as well as any other Central European army. Most armoured trains were “one-offs”; developed with great latitude regarding design and weapon placement.

I worked from a wide range of photos and blueprints I found online, as well as many online articles both in English and translated from Russian.

The package contains all five .stls;

The armoured car fits on the track system included int bundle or as a separate package. The track system is identical to the one used for the civilian train system; both are interchangeable.

As some may prefer the civilian train, but with a flak car, I have loaded the flak car, complete with the two weapon options (Quad 20mm and single model 1939 37mm AA gun) as a separate file.

One thought on “The Little Engine that could… Pack Some Hurt!! Armoured Trains in bolt Action”