As I noted in my earlier article on the Spanish Civil War (the “SCW”) it was a truly savage war fought by a desperately poor country. Despite arms supplied to the two opposing sides from fascist Germany and Italy and Communist Soviet Union, both sides had to largely rely on their own resourcefulness to arm their large armies. The Spanish army, prior to the 1936 rebellion, totaled about 135,000 men, split between colonial and home posts. That pre-civil war Spanish army was not well equipped and had only made some small forays into mechanization. Yet after hostilities broke out both the Nationalists and the Republicans each eventually had upwards of 700,000 troops under arms, although the quality of those arms was often lacking.

When the Civil War erupted in July 1936, the Republicans, or Loyalists, employed their strength in the more industrialized regions to craft a wild array of improvised armoured vehicles. They ranged from tanks and armoured cars to what really were very early armoured personnel carriers. Each was very often a “one-off” and they ranged from the almost comical to the artistic in design. They were generally built onto the chassis of a heavy truck with an outer frame of wood onto which was fitted boiler plate. Because of the dirty colour of the boiler plate, the vehicles soon were referred to as “Tiznaos”, which means “black” or “sooty”.

Boiler plate is not true armour plate, so the vehicles were not always fully protected vehicles, but as the adage goes – “in the land of the blind a one-eyed man in King”. If your opponent in a battle lacks their own armoured vehicles and anti-armour weaponry, a sort of armored vehicle can be a terrific morale booster and force multiplier.

These Tiznaos were used primarily in the urban fighting and had the capacity of not only using their own armaments but had port holes in the hull for the occupants to fire their small arms. As well, they were used to transport small sections of men to assault buildings, providing protection from the defender’s small arms.

On the down side, the added weight far exceeded the truck’s intended weight capacity, and this caused great strain on the truck’s engine, transmission and suspension components. Further, the workers constructing these too often neglected to allow for any access points to the engine and drive train, thus even the most routine maintenance required the removal of the entire armoured body.

Anyone wishing to create am .stl for a Tiznao can’t really go wrong. There was such a wild number of styles created, and few if any survived the war, so all we can do is go through photographs and work from there. I found this picture (below) and built the design in CAD, starting with my file of a Fiat truck.

I armed it with a water cooled MMG, facing the frontal arc, as I am presuming the one in the picture has. The cylindrical hull has been given rifle ports, as in the photo. I added hinged doors at the back. The wheel covers have been modified in my model to ease printing. I honestly don’t know how the truck in the photo dealt with any bumps, but from all the photos of this style of vehicles the risk of the tires being shot out was a concern. Changing a tire, however, seemed to have been given less thought. 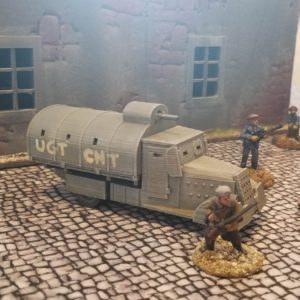 Use in Bolt Action

In Bolt Action, I would suggest that these vehicles be given a 7+ armour rating but with an unreliable rule. The point cost, using the Vehicle Design System, would be

That is just a suggestion, but I think it provides a fair valuation on this vehicle system. Again, this would only be suitable with a scenario where both opponents are playing the same time period and quality of armies.

This is an original design, but I am offering it for free download, with the usual licensing provisions. I realize that not all people share my interest with the inter-war and early war period, but I am hoping that with some exposure others may see the enormous potential this time period has for gaming. It really offers a whole new take on your hobby and your game play.

The .stl is now available at the www.www.wargaming3d.com marketplace for a free down load. 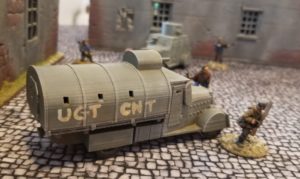 (these are Spanish language sites, but Google offers English translation)