The Big Wheel keeps on Turnin’…

Great Britain has given the world a lot of wonderful thing. Parliamentary Democracy. Vaccines. The Steam Engine. Monty Python’s Flying Circus. Plus countless other things that have advanced our standard of living and quality of life. Nowhere on any such list are you likely to find “The Great Panjandrum”.

The Great Panjandrum was an unusual implement of warfare on its own and may have been forgotten in the archives of WW2 had it not been for the old BBC TV Series “Dad’s Army”. Thanks to the Home Guard of Walmington-on-Sea, we also have an alternate reality version of it, as if the original version wasn’t weird enough on its own.

The actual Great Panjandrum was a massive, rocket-propelled, explosive-laden cart designed by the British military during World War II. It was one of a number of highly experimental projects that were developed by the Admiralty’s Directorate of Miscellaneous Weapons Development (DMWD) in the final years of the war.

The device was intended to be launched in the first wave of an amphibious landing and would be launched directly from a first wave landing craft. The launched Panjandrum would proceed at high-speed (60+ mph!) and strike the sea wall, detonating 2 tons of HE. This would theoretically blast a ramp allowing the tanks to proceed inland. The disaster at Dieppe in 1942 had emphasized the need to breach sea walls and other high barriers to enable tracked vehicles to get off the landing beaches.

A brief history of this oddity can be found here

But then along came these fellows

When Warlord Games prepared the Sea Lion Campaign book, they include The Great Panjandrum, together with its option to be controlled by radio signal. The rules for the use of this bizarre bit of fun are as follows;

Fielded as inexperienced and manned by a crew of 3 men, the Panjandrum will cost you 25 points.

Movement – The Panjandrum can be carried on the back of a transport or towed behind any transport that can move a medium artillery piece.

Fire – The Panjandrum can be launched with a fire order. Upon firing, the Panjandrum moves 3D6 in a straight line. in subsequent turns, roll a D6 and apply the following rules – 1/2 the wheel turns 45 degrees to the left and moves 2D6, on a 3/4 it goes straight ahead 2D6 and on 5/6 turns to the right 45 degrees and continues 2D6.

Radio Control – for an additional 10 points, roll a D6 at the end of the movement phase and on a 4+, the Panjandrum can be rotated up to 45 degrees in left or right.

Detonation – When the Panjandrum comes into contact with a unit – friend or foe – or a solid object – buildings, woods, rocks etc., it will explode like a Heavy Howitzer causing 3D6 hits

I wrote up the file using the very limited information available online. The actual Panjandrum stood 10’ tall, and from photos I have added appears to have hub about 6’ wide; those were the dimensions I worked with. 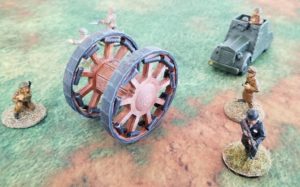 The model has two wheels, each with two-part. Please print the wheels one at a time; you don’t want to mix up the halves, or the propelling rockets will not be facing the right way. There is an alignment notch on the inner hub. Please look at the linked photos. 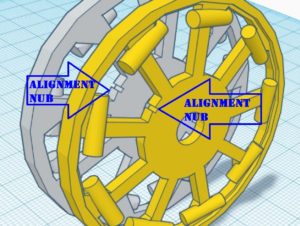 You need to align these on each wheel and pop the wheel onto the center piece, this will help get the two halves of to line up. You might want to give the spokes a tweak together with a pair of needle nose pliers. Do likewise with the second wheel.

The free download is available at the www.wargaming3d.com shop.

Agreed, it is whimsical and you wouldn’t likely get to use it in a tournament, but it is “only a game” after all, and Captain Mainwaring would be proud of you!