Wargaming World War 2 very often centres on the Late War battles between armoured behemoths on a gaming table festooned with rocket launchers, armoured half-tracks and every other conceivable weapon short of the Death Star. But if you only gamed the Late War, you are cheating yourself. It is like walking into a movie when it is 2/3rds over or starting a book in the final two chapters. You will find out how it ends, but you will have missed a lot of the detail.

Playing Bolt Action (or any similar WW 2 table top game system) in the Early War gives a whole new flavour to your hobby. I am in the midst of building an Early War Polish Army. Poland, of course, was the only Allied military that literally fought from the start of the European war until the end – Sept. 1, 1939 until May 8th, 1945. The tenacity of the Polish people is legendary , and I hope to represent that on the game table.

The Polish Army is covered in the French and Allied Army book. The listing for the Polish Army is fairly short; of course the Poles subsequently fought in the Western Desert, Italy, North West Europe and on the East Front as part of the Red Army (after being released from Soviet POW camps after the start of Barbarossa), but those units are covered off in other Army and Theatre books.

All Early War armies tend to have a similar theme – a lot of rifles, a dearth of SMGs, a lot of horse drawn artillery, and a lot of leftovers from the Great War. The Polish War was stymied by many factors; modern Poland was only established in 1918 and was immediately embroiled in a war with the Soviets. It was a poor agrarian nation – only 30 million people in the 1930s – and faced two large hostile nations – Germany and the Soviet Union.

The Polish Army in Bolt Action does offer a few unique units, such as

What About Some Transport??

I am glad you asked, because I have loaded a file to Thingiverse for the Polish Fait 621 truck. The Fiat 621 is a 4 x 2 cargo truck manufactured under license in Poland and was the most common wheeled transport for the Polish Army. They were also used by the Wehrmacht after they overran Western Poland. The .stl is available at this link:

The .stl file is a remix of Jarlang’s file. I upsized it to 1/56th scale, separated the wheels, axles, and cargo bed. I rebuilt the hood, bumper, fenders, radiator, windows and doors, adding detail and definition. I redid the wheels and tires. I added the tool box on the driver’s side of the hull. Lastly, I created the MMG and its mount as an optional armament. There is a mounting hole in the floor of the cargo bed, so you can mount and remove the MG as you wish; you don’t have to glue it in permanently. This file is meant for an FDM printer, hence the number of parts and manner of assembly. 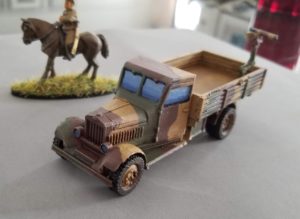 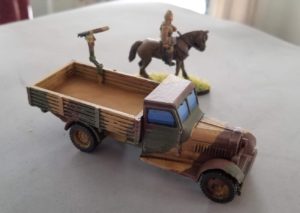 Using the Fiat 621 in Bolt Action

That should be fairly basic, right? The Fiat 621 is a basic truck, and it can carry 12 men or tow a light howitzer or a light or medium ATG… Except that we are talking about Warlord rule books, and as we know too well, Warlord seems to be somewhat less than ardent in their editing… so for the Fiat 621 we get the following entry;

You caught the last line, right?… add the MMG and you lose all transport capacity. It makes no sense, to lose the capacity to carry 12 men because you add an MMG which costs you 15 points plus you still pay for the full price of the truck. Most if not all other armies in Bolt Action have a similar generic truck for the same price and with the same armament option. They don’t however lose their ability to carry passengers if you choose to buy the MMG. I emailed Warlord to ask if they considered this as an editing error or if there was any basis for this oddity. I never received a response beyond an acknowledgment of receiving the message.

I would suggest that if you use this truck, just explain the situation to your opponent; logic would dictate that you pay the extra 15 points for the MMG and keep your transport capacity.

If you are considering a Polish Army build, this truck may be of interest to you.