Slow and Steady Wins the Race

The Churchill A-22 Pack

Before Christmas I ran a poll on my Facebook page (Deweycat Productions) asking the FB page followers what AFV they would most like to see a file made available for. There were a substantial number of votes cast, and they ranged from a German field kitchen to the American Weasel transports, but the winner was the British Churchill tank. I then went to work on as broadly-based package of 28mm scaled Churchill tank models, suitable for an FDM printer.

But first let’s take a brief look at this, the last British “Infantry Tank”

End of the Infantry Tank Line

The A20 British infantry tank design was a prewar General Staff specification, meant to be a replacement for both the Matilda and the Valentine. Just like the former, it incorporated typically trench-warfare features. It was envisioned as slow (infantry pace), heavily protected with an armament only suitable to deal with fortifications (low velocity, high caliber, high explosives), crushing barb wire in the process. The tracks had to be long enough to allow large trench crossings, including anti-tank ditches. This was developed into the A-22, which became known as the Churchill Tank/.

The A22, Tank, Infantry Mk.IV (the Mk.III was the Valentine) might seem like it was named after the iconic British leader of the time. But -according to Churchill himself- the name honored the memory of his XVIIth century ancestor, Sir John Churchill, 1st Duke of Marlborough. It could also have commemorated the instrumental leadership of Sir Winston Churchill, then First Lord of the Admiralty, and the head of the “Landship Committee”, the initiator of British tank development during the Great War.

The first two versions were armed with the 2 pounder ATG, and in the case of the Mark 1, a 3” howitzer in the hull, where the hull MG would later be placed. The first use in action was during the August 19, 1942 “raid” on Dieppe France by the Canadian 2nd Division. The landing was a disaster, the Canadians sustaining 70% casualties, with almost 1000 dead, plus thousands more wounded and/or captured. There were 29 Churchills that made it to the beaches, but they had problems gaining traction on the shingle beach, and only one was able to enter the City proper. All the tanks landed were lost, and all crews were killed or captured. It was reported that the Germans assumed, after examining the abandoned tanks, that the Churchills were an unsuccessful prototype that had been sacrificed. At the same time, the Germans were starting production of the Tiger tank, which was a much more advanced tank at that time.

Further modifications were made, and the innumerable teething problems were eventually worked out. Service the later stages of the North Africa campaign demonstrated the Churchill tanks ability to climb steep gradients, its robust abilities and its thick armour provided remarkable protection to the crew.

The Churchill was the basis of many of “Hobart’s Funnies”, and it soldiered on through the war and it carried on to fight in Korea and into the early Cold War. I encourage you to look at the tank encyclopedia entry for this classic AFV

I have only made one hull. There were minor changes in the various production series of the A-22. I will leave that to the rivet counters to wrestle with, but the hull presented covers the mid and later production range for the A-22

I have the following versions in this package 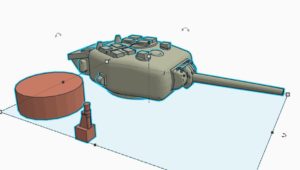 Please note the there is only one hull file; I left a small hole in the rear of the tank; the tongue of the Crocodile trailer has a recess in it as well. You will need to cut an 8mm length of paper clip and carefully place it is the trailer tongue recess. Use a dab of CA glue. When the glue is dry, you can press that protruding bit into the recess on the back of the tank.

That way you can use the model as a Crocodile tank when you wish, but as a plain gun tank when you prefer to field that. If you have no desire to ever use a Crocodile, just fill the small hole in the hull with a bit of putty. This prevents you from having to print more than one hull. Which is good, because the hull is a long print – the tracks alone took me 10 hours and the hull was another 6, at 0.1mm layers. The Churchill is a large tank.

For the NA75 model, I did not include the coax MG; I suggest to use a small length of paper clip; as the NA75 used the M4 Sherman’s gun mantlet, it didn’t use the Besa MG but instead the browning MG. It is just a straight barrel, so the paper clip works.

You can find this package at this link :

Using the Churchill in Bolt Action

The Churchill tank is a costly tank to field in Bolt Action, costing upwards to 500 points, dependent on the variant, but it comes as a 10+ armour as its base, and can be upgraded as a 11+ armour for the Mark VII model. It also gives the various options presented in these files – the AVRE with its “flying dustbin” spigot mortar and the flame spewing Crocodile.