A Bolt Action Scenario with a wee bit of 3D printing…

Being able to a creator with your 3D printer not only allows you to expand your wargaming armies, it can also allow you to keep your gaming fresh by designing and playing new scenarios. While my own gaming is focused on 28mm gaming in Bolt Action, this works for almost any game genre and scale.

If you play Bolt Action, you will be familiar with the standard scenarios provided in the main rule book plus the various campaign and theatre books. However, these can seem a little formulaic after a while, and it is always good to mix things up a bit. With that goal in mind, I have written the scenario below. But first let’s talk about this scenario’s objective, which is where it ties into 3D printing.

3D printing, as we covered in Chapter 8 of the “3D Printing and You” series, gives us a terrific opportunity to print various items as both terrain pieces as well as potential game objectives; be it a building, a supply depot or a particular landmark. In this case I have chosen something a little different, in that it involves casualty figures. The actual file I created is a remix of an excellent file on Thingiverse; I upscaled it to 28mm, placed it on a base to simplify the print and created mirrored images.

Below are some photos of the figures. I print with an FDM (filament) printer, and these printers are not geared to print the fine detail you need to do figures, but these figures turned out well enough for their purpose. I did a simple three paint scheme – grey uniform, flesh and black boots and webbing; then ink washed, dry brushed, some static grass then sprayed with matt varnish. 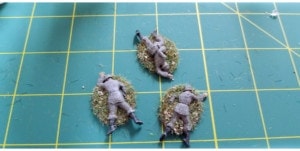 Below is the scenario for these figures. I like the idea of randomness in gaming; it is a closer reflection of real life. In this case the objectives (the tactical maps the casualties were carrying) have an unknown value, and at the game’s end each player rolls for the value of the map(s) they may have recovered during the game. This prevents one player from snatching two objectives early in the game and then sitting on their haunches for the rest of the game – because they can’t be sure to win in the end; the single objective seized by their opponent may have more value than the two they possess. It keeps the pressure on, and encourages some dynamic games moves.

Please give it go.

The Scenario is also added to the Thingiverse post, as an added .pdf file

This is intended as a 1000 point reinforced platoon game, although it would be playable in most any size battle.

It is intended to be played on a 6’ x 4’ game table, lengthwise. The table should have a good amount of terrain features, as an open table with no movement / LOS obstructions would hinder a competitive game.

Earlier today an Axis HQ party was ambushed by partisans while in No Man’s Land. Unknown to the partisans each of the three members of that party possessed a map, indicating the location of various troop concentrations, supply depots and hidden gun positions. Your intelligence unit has learned that these three casualties are still out just beyond our front lines, and Corps HQ has demanded that these invaluable pieces of intelligence be seize ay once!

This is to allow for random placement of the figures.

Both sides are rushing in to locate and seize these casualty figures. There is no pre-deployment, no prep barrage. Your HQ has simply ordered the closest units to race forward and recover the maps.

A minimum of half a player’s units must enter the board on Turn 1.  There will be no outflanking in this scenario.

To seize the figure, a unit must end the turn with the base of a figure of that unit in contact with the casualty figure. At the next turn they can then start to return with that figure to their line. The figure can change hands in the game (between friendly units or between opponents, as the result of combat).

Should a player be able to remove the casualty from the table edge, they gain one extra point towards victory.

Not All Intelligence Hold the Same Value!

At the games end, each player will then roll one D6 for every casualty in their possession. This roll will count for victory points for the scenario. The roll’s value recognizes that the actual value of the map recovered from the casualty figure – because not all military intelligence is of equal value. One of the maps may have been of the key supply depot for the Axis, while the other map may have been the route to that officer’s mistress’s apartment.

It is possible that one player may hold two figures and the other only one, but the first player may roll a 3 and a 2, while the second rolls a single 6; all things being equal, the second player would win.

If one or more of the casualty figures is moved off the board, you can add one point each to your roll results.

Therefore it is important that you not rest on your laurels – you must push to retrieve all three casualties!

Add the point total for the casualties recovered, plus any extra points earned for removing the figure from your deployment zone table edge. Highest number is the victor.