The T20 Komsomolets was a small armored tractor which was designed for towing artillery pieces. The T-20 played part in the motorization of Red Army artillery units in the late 1930s and saw extensive action in the Winter War and first half of WWII on the Eastern Front. This vehicle would even be modified into the ZiS-30 tank hunter in 1941 but was perhaps better known for its unintended multi-role use as an armored personnel carrier, ammunition carrier, gun carrier, as well as a tankette as a result of the lack of tanks that the Red Army faced during the early stages of WWII.

Each Rifle Division had at least 60 Komsomolets tractors, and sometimes replaced the T-27 tankette. Sometimes these tractors served as infantry transport vehicle, as Soviet industry could not provide sufficient transport for infantry.

Romania, Finland and Nazi Germany all used captured vehicles. The Germans even mounted Pak 36 ATGs onto the T-20s.

The Bolt Action rules recognize the T-20 as an armour +7 vehicle (armoured carrier), armed with a forward facing LMG, and capable of carrying 6 passengers or towing any ATG, any AA gun, and either a light or medium howitzer. That is a lot of towing capacity for a small vehicle.

Can you use this as a troop carrier? With your men sitting in open view?

Yes, Comrade, you can, and they did – as witnessed here:

So you can carry a small six-man squad (did someone say combat engineers?) and drop them, and then you still have a light tankette to harass your opponent with. Not a bad deal for a regular one at 60 points. 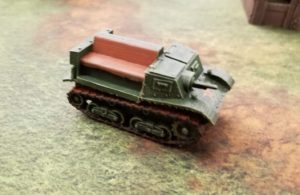 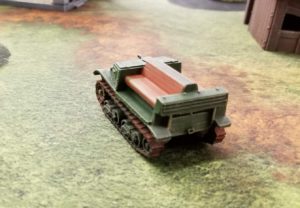 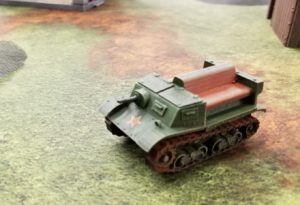 This is a minor refinement of the excellent work of Jarlang, who has created some wonderful files of the more unique interwar and WW 2 AFVs. All I did was reduce the height of the bolt protrusions on the hull, reworked the front LMG mount (you can use the printed barrel I added, or just use a small piece of paper clip) and, after I did the test print, I added the divides in the passenger seating; I only noticed those in photos after I had printed my model. The seat manufacture seems to have varied from cushioned seats to wooden slats. This model represents the cushioned seats.

Your can find the file on Thingiverse, here: