The Bob Semple was one of the first tanks I printed when I got a 3D printer. I was drawn to it due to it’s sheer impracticality, it’s oddness and of course, pure patriotism being a New Zealander. After all who could not fall in love with a tank made out of a bulldozer, with some corrugated iron bolted on for armour. It was the original “Killdozer”.

New Zealand, like its neighbour Australia, had no indigenous armoured fighting vehicle industry. It was expected that armoured fighting vehicles would be provided from Britain. Australia and New Zealand did have some heavy industry that could be turned to the production of armour and armoured vehicles but little had been done. The idea of mechanising the New Zealand Army had been suggested before the war but without much progress. The use of the American Disston “Six Ton Tractor Tank”, a 1937 vehicle constructed of an armoured box on a Caterpillar Model 35 chassis which had been sold to Afghanistan and China, was suggested.

New Zealand had built some improvised armoured trucks and unable to get any tracked carriers from Australia were building their own with armour plate imported from Australia. After the Fall of France in mid-1940, and the loss of most British tanks there, there was no likelihood of production being spared for New Zealand. Rather than obtain the armoured superstructures from America, it was felt they could produce their own using local materials and resources.

It was decided that a ‘tractor-tank’ would be an adequate design; if the need for defense arose, a large tank superstructure could be bolted upon a tractor base within a few hours, allowing for quick transformation and deployment of the tanks.

The first (mild steel) prototype was built on a Caterpillar D8 crawler tractor, a type which was readily available.[5] The Public Works Department had 81 D8s, and another 19 were available. A lack of weapons meant that it was equipped with six Bren machine guns — one in each side, two facing the front, one in the turret and one at the rear. The vehicle was very tall at 12 ft (3.5 m) and performance was poor. Due to the lack of armour plate, corrugated (manganese) plating was used in the expectation it would deflect bullets. The crew of eight included one gunner who had to lie on a mattress on top of the engine to fire his Bren gun.

The tanks were constructed without the use of any formal plans or blueprints. Working from an American postcard depicting the conversion of a tractor to a ‘tractor-tank’, Bob Semple and TG Beck (Christchurch District Works Engineer), improvised the design of the tanks. Using resources available to Bob Semple as Minister of Public Works, the first tank was quickly produced in the PWD’s Temuka workshops. The additional two were built at the NZR Addington Workshops. The first cost £5,902; the second and third £4,323; total cost £10,225 (although the Army was only billed £3,414).

The intention was to disperse the hulls at locations ready in case of a Japanese invasion at which point they would be mounted on tractors for use. The idea was discarded after the tanks attracted public ridicule; however, Bob Semple stood by his design and even stated “I don’t see anyone else coming up with any better ideas.”

Due to the limitations of requirements and resources, the tank was a functional failure. By using a large tractor as a base, and bolting on a hastily designed and poorly constructed tank superstructure, the resultant tanks were inadequately armored, extremely heavy (20–25 ton), unstable, restricted by tractor gearing to slow speeds, and had to stop to change gears. Furthermore, due to the shape of the underlying tractor and undue vibrations, shooting from the tank was both difficult and inevitably inaccurate.

In the end, due to their impracticality, the tanks were disposed of by the Army. They had been given Army serial numbers NZ6292 (held at Papakura) and NZ3494 & NZ 3495 (held at Burnham). One went to the Pacific in 1944, after being stripped of its armour.

Printing a prototype Bob Semple Tank in either 15mm or 28mm is easy. For 28mm use the files provided by Ringlord on Thingiverse, while a 15mm version can be found in the famous m_bergman files. There is currently no version of the tank with a 37mm gun… yet.

There are, of course no official rules for a Bob Semple tank, and it was (thankfully), never used in action. That said, there was a very real threat of Japanese invasion, and at the early stage in the war, it was really the only armour that New Zealand could produce locally. As with the Schofield, the Bob Semple would only be used in “What-If” type scenarios like a Japanese invasion of New Zealand similar to that of the Germans in Warlord Games “Operation Sea Lion Supplement”. In this case, the Bob Semple would fit a Tank or Armored car slot in the army list with your opponents consent. To create the profile for the Tank we once again use the Vehicle Design Rules found at WWPD written by the team at Bolt Action Alliance. 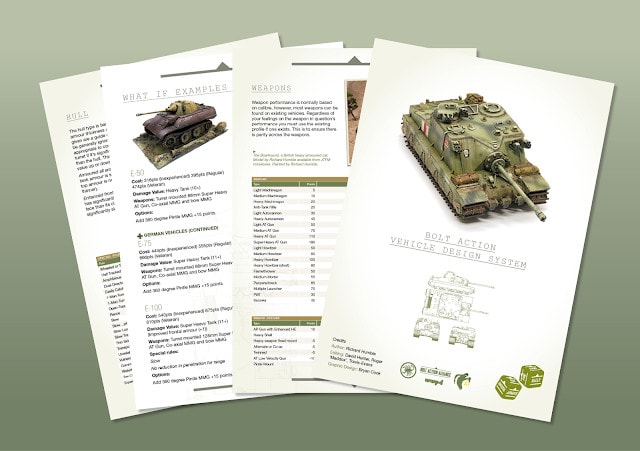 Or alternatively, the “Paper Tiger” 37mm version that was proposed but never made: