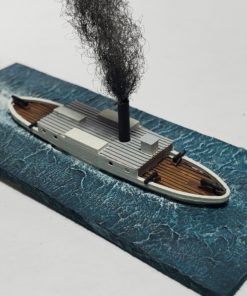 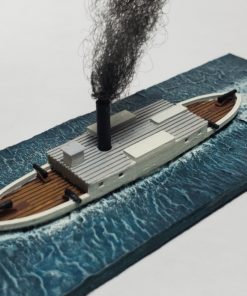 “The worst boat of all ferryboats…”

Built in 1850, Whitehall was a ferryboat used to transport civilians. She was acquired by the Navy in 1861 and assigned to blockade duty in the South. She soon set sail for Port Royal, South Carolina but she was found to be unseaworthy and stopped at Philidelphia and Hampton Roads for emergency repairs. She attempted to sail for Port Royal multiple times, either towed or under her own power, but was forced back each time. Finally realizing that Whitehall would never make it to Port Royal, she was sent to Baltimore for an extensive overhaul and reassigned to the North Atlantic blockade in Hampton Roads. She saw some minor action in Hampton Roads, and was present at the Battle of Hampton Roads. She did not directly participate in the battle, she and the rest of the blockade ships, stayed at long range firing ineffective shots at Virginia. A lucky hot shot from Virginia hit Whitehall and set part of her aflame. The day after the battle, while anchored near Old Pointe Comfort, a flash fire erupted aboard the boat and completely destroyed her.

USS Whitehall with base

Be the first to review “USS Whitehall” Cancel reply