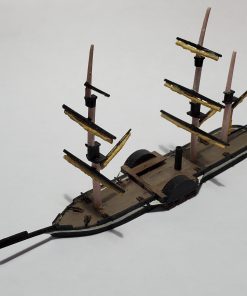 USS Mississippi was laid down in 1839 and she was constructed under the personal supervision of Commodore Matthew Perry. After her launch, she served for several years around the US coast, in which time she performed crucial experiments that helped to develop the steam navy. She then served during the Mexican-American War, taking action against several cities in Mexico, including Veracruz. After the war, she served in the Mediterranean for a short time before being prepared and joining the expedition to Japan. When the Civil War broke out, she was assigned to serve in the Gulf of Mexico and captured several blockade runners there. She then was assigned to serve under Farragut in his attempts to enter the Mississippi and capture New Orleans. She was able to enter the river, and engaged Fort Jackson, Fort St. Phillip, and the ironclad CSS Manassas. The engagement with Manassas was a complete victory for Mississippi as she forced the ironclad aground and bombarded her with 2 heavy broadsides until the boat was forced to be abandoned and destroyed. She then continued upriver to Port Hudson, Louisiana where she engaged with forts guarding the city. While attempting to pass the forts, she ran aground with several attempts made to refloat her under heavy fire. These attempts all failed, and her machinery was destroyed, her guns were spiked, and she was set afire to prevent her capture. she was completely destroyed when the flames reached her magazine and she exploded.

USS Mississippi with base

Be the first to review “USS Mississippi” Cancel reply