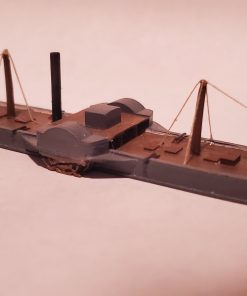 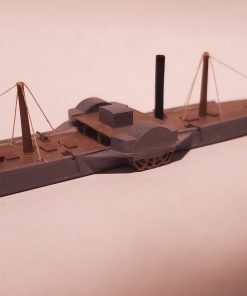 USS Miami was one of the many gunboats built to defend the rivers of the US, she initially served on the Mississippi and assisted in the Vicksburg Campaign by towing ships up the river before being sent on reconnaissance duty on the James River for two months. After her service on the James she was sent to enforce the blockade in the North Carolina sounds. While defending the sounds, she encountered CSS Albemarle when she descended down the Roanoke River to attack Plymouth. She was driven off by the ram after her commander was killed by a shell that bounced off Albemarle’s casemate. She would face Albemarle again several weeks later in the Battle of Albemarle Sound. She was then assigned to service on the James River again and served there until the end of the war.

USS Miami with base

Be the first to review “USS Miami” Cancel reply