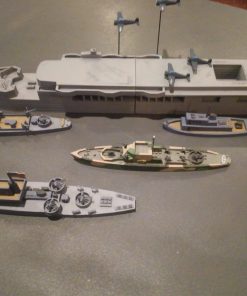 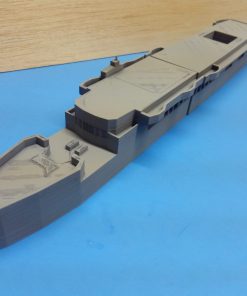 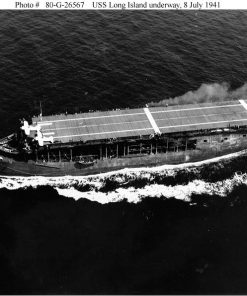 In the tense months before the attack on Pearl Harbor, Long Island operated out of Norfolk, Virginia, conducting experiments to prove the feasibility of aircraft operations from converted cargo ships. The data gathered by her crew greatly improved the combat readiness of later “baby flattops”. Just after the Japanese attack, she escorted a convoy to Newfoundland and qualified carrier pilots at Norfolk before departing for the West Coast on 10 May 1942. Reaching San Francisco on 5 June, the ship immediately joined Admiral William S. Pye‘s Task Force One (TF 1); consisting of seven battleships and provided air cover while at sea to protect the West Coast of the United States and reinforce Admiral Chester Nimitz‘s forces before, during and after their victory in the Battle of Midway.[2]

Long Island departed San Diego on 8 July and arrived Pearl Harbor on 17 July. After a training run south to Palmyra Island, she loaded two squadrons of Marine Corps aircraft and got underway for the South Pacific on 2 August. Touching at Fiji on 13 August, she then steamed to a point 200 mi (170 nmi; 320 km) southeast of Guadalcanal and launched her aircraft (19 Grumman F4F Wildcats and 12 Douglas SBD Dauntless dive bombers).[3] These planes, the first to reach Henderson Field, were instrumental in the Guadalcanal campaign and went on to compile a distinguished war record. Her mission was accomplished. Reclassified ACV-1 on 20 August, Long Island sailed for Efate Island, New Hebrides, and arrived on 23 August.

Long Island‘s actions at Guadalcanal are mentioned and seen in the movie Flying Leathernecks.

Be the first to review “USS Long Island” Cancel reply